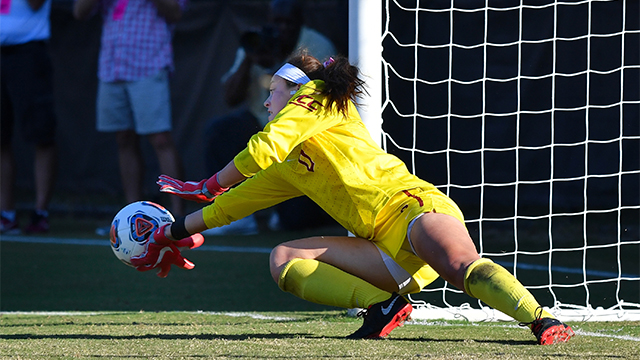 With Sunday's matchup of USC and Florida State pitting two title challengers against each other in the third round, it was no surprise penalty kicks were required to decide it.

The Seminoles would edge the shootout when Caroline Jeffers saved a penalty and freshman Yujie Zhao converted the decisive spot kick to win it 5-4 for the ACC power. That came after 110 minutes of soccer, where USC striker Penelope Hocking's first-half strike was canceled out by a Dallas Dorosy goal in the 65th minute.

“I would say that the game played out as we kind of thought it would as I expressed before the game,” FSU head coach Mark Krikorian said after the game. “I have nothing but great respect for the group from the Southern California. Their coaches are exceptional, the players are very good and they play very hard and attacking style of soccer. But at the end of the day, we found a way to continue this journey."

The Seminoles will host Penn State next weekend, setting up a quarterfinal clash between two former national champions. It was another 1-0 win on Sunday for the Nittany Lions, shutting out Wake Forest 1-0 in Morgantown, West Virginia. Marissa Sheva provided the winning margin, as her 14th minute tally provided the difference.

Earning the No. 1 seed before the tournament for a reason, FSU's three top-seeded peers all survived Sunday's action as well.

Stanford returned to its home turf after Friday's second round game was moved to due unsafe playing condititions. Once again, Jordan DiBiasi came through in the clutch for the Cardinal, scoring the winning goal in the 37th minute against Wisconsin.

It was a much easier third round matchup for Georgetown, which cruised to a 4-1 win at Shaw Field against Duke.

Caitlin Farrell opened the scoring in the 15th minute that was canceled out by Delaney Graham's goal 10 minutes into the second half. Parity was short-lived, however, as former Cardinal Kyra Carusa pushed the Hoyas back out in front in the 60th minute. The Hoyas tacked on two more through Paula Germino-Watnick, scoring a quick-fire brace in the 71st and 77th minute.

Facing an ACC opponent at home, North Carolina also enjoyed a three-goal stroll against Virginia Tech. Alex Kimball got the Tar Heels off to a quick start with an eighth minute goal, while Brianna Pinto and Dorian Bailey added second half goals to secure a 3-0 victory.

For the first time in program history, Tennessee is on its way to the NCAA quarterfinals. The Volunteers will get a crack at Stanford after beating SEC opponents Texas A&M 3-0 at home.

Fast starts are one way to ensure that there are no nerves, and it was Danielle Marcano that cracked things open with a goal in the third minute (with a Bunny Shaw pass opening the field up for the chance). Marcano found the back of the net against two minutes into the second half, again Shaw getting credit for an assist. A 68th minute strike from Salera Jordan made it a safe lead, as the Volunteers march on to the next round.

Big 12 program Baylor made history of its own, winning 2-1 at home in a rough-and-tumble clash against Virginia. After Julie James and Meghan McCool exchanged goals in the first half, Kennedy Brown put the Bears ahead for good nine minutes into the second half. UVA would go on to outshoot Baylor 12-8, though the Big 12 side's physical play (they were whistled 12 times in the game as opposed to five for Virginia) stifled the ACC side's possession style.

So far through the NCAA tournament, UCLA has three 5-0 win, scoring 15 goals and yet to concede a goal.

That record will be tested next weekend against North Carolina, though on Sunday night NC State was no match for the Bruins. Jessie Fleming scored twice in the game's first 22 minutes to put the Bruins up by a pair of goals. The Wolfpack weren't able to muster much going forward, and Karina Rodriguez scored on a corner kick to make it a 3-0 lead at the half.

Two more goals would come in the game's final eight minutes, as Chloe Castaneda and Hailie Mace each chipped in goals in the 83rd and 85th minutes respectively.