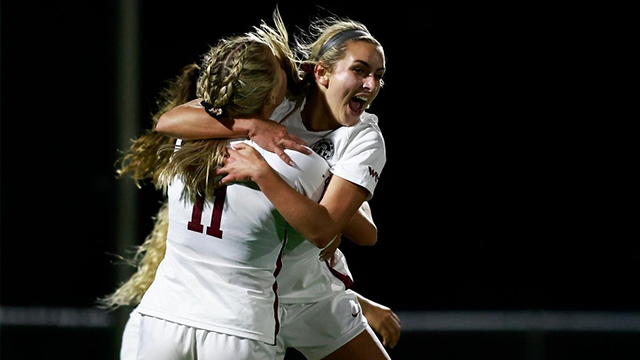 ACC sides dominated during Wednesday’s action at the Women’s DI NCAA tournament down in Cary.

Recap the action below.

Five ACC programs were in action on Wednesday, and the quintet all advanced to Sunday’s quarterfinals.

Securing the most dramatic result was Clemson, which advanced past UCLA on penalty kicks. A 53rd minute goal by Samantha Meredith nearly was enough for the Tigers, but Olivia Athens scored with just three minutes left in regulation to progress the game to overtime. Goalkeeper Hensley Hancuff made nine saves, and after nearly an hour lightening delay, Clemson edged UCLA by 6-5 in the shootout.

The two sides from North Carolina bagged 1-0 results to move along. The North Carolina Tar Heels were outshot 13-7 by a strong Washington side, but a Tori Hansen strike in the 67th minute was enough to progress. Claudia Dickey made six saves to secure a shutout.

Another impressive defensive effort by Duke clinched progress for the Blue Devils. Caitlin Cosme scored just under three minutes into the game against Mississippi, and that was all Duke needed, winning 1-0.

Florida State awaits Duke in the all-ACC quarterfinal. The Seminoles were pegged back by a Frankie Tagliaferri goal in the first half. But the quality and depth of Mark Krikorian’s side secured the comeback, scoring three unanswered goals. Kristina Lynch tied the game in the first half, and two goals in seven minutes from Clara Robbins and Gabby Carle made it a 3-1 game.

The Virginia attack finally solved the Rice back line in the 37th minute, and Diana Ordonez scored all three goals for the Cavaliers in a comfortable 3-0 win against the Conference USA side. UVA outshot the Owls by a 16-2 margin to advance.

Two programs from Texas extended their stays in Carolina, advancing on penalty kicks. A six-save performance from TCU goalkeeper Emily Alvarado kept a 1-1 draw close, after Georgetown’s Maya Fernandez-Powell had a first half goal canceled out by midfielder Michelle Slater’s second-half strike. The Horned Frogs won the shootout by a 3-1 margin, as Alvarado made three saves.

Wednesday’s wildest game was a frenetic, back-and-forth battle between Oklahoma State and Texas A&M. Gabriella Coleman and A&M’s Taylor Ziemer exchanged goals in the game’s first 18 minutes, before a goal from Ali Russell put the Aggies up 2-1 at the half. The Cowgirls went back in front, as Olyvia Dowell tied the game in the 48th minute with an excellent goal and Coleman put her side in the lead. Taylor Pounds equalized to send it to overtime and a shootout, where the SEC side won 4-3.

There is one west coast team left in the tournament, as Santa Clara survived a test from Arkansas, bagging a 2-0 win in the final slate of games. Izzy D’Aquila put the Broncos up by a 1-0 score in the 28th minute, and a Skylar Smith goal in the 73rd minute extended the lead. Julie Doyle assisted on both goals.

HIGHLIGHTS | Goals from Izzy D'Aquila and @sky__smith, assists from Julie Doyle and saves from @marleenicolos_1 in today's 2-0 victory over Arkansas in the third round of the NCAA Tournament!#StampedeTogether #SCUBroncos pic.twitter.com/CORHUSrgeY