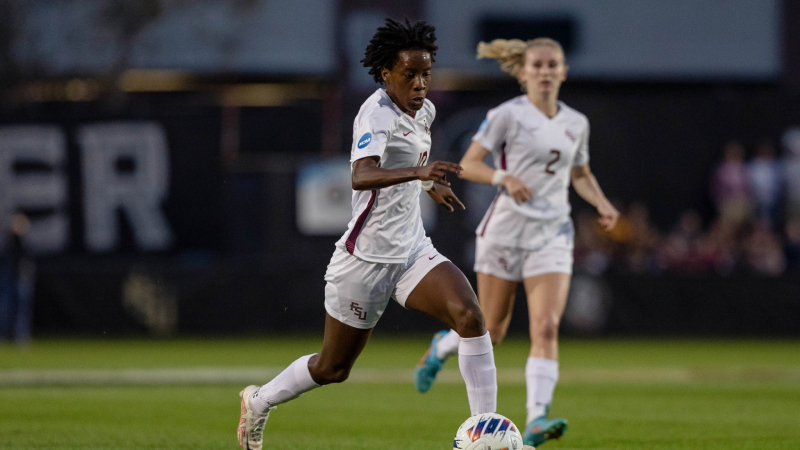 On a weekend when the College Cup tournament field was finalized, the four contests played out were appropriately tight. The largest margin of victory was two goals — and even that game felt closer than the scoreline suggested. UCLA was needed twice, and a title favorite was pushed to the very end. And at the end of it all, four teams clinched their spot in Cary, North Carolina next weekend. Here’s a look at every game.

The ball fell kindly for Sofia Cook, dropping gently to the edge of the box in extra time, with just enough pace to be hit cleanly. But the UCLA forward still had a lot to do. As two Virignoa defenders lunged towards her, the freshman stroked the ball with the outside of her right boot, with sufficient swerve and pace to cruise past the goalkeeper. It was a wonderful goal, and, on balance, a deserved winner for a Bruins side that showed more quality in critical moments Saturday night. UCLA was outshot and, at times, out passed through 110 minutes of play. But it made the most of its chances, crafting two eloquent goals for a 2-1 win. Virginia was not without fight, though. The Cavaliers didn’t show their best until late in the second half, when Alexa Spaanstra was buzzing down the wing and Haley Hopkins harassed defenders through the middle. Their goal was a deserved one, with Hopkins nodding home from Lia Godfrey’s corner. Although they probed for a second in the final minutes of regulation, it never came. Ultimately, the game needed a moment of quality to settle things. And Cook provided it.

Talia Dellaperuta was simply the first to react. The North Carolina midfielder clanged a shot off an opposing defender, leaving the ball grounded between three players. And Dellaperuta was the first to pounce, lashing the loose ball into the roof of the net. Her goal put distance between UNC and Notre Dame in their NCAA quarterfinal contest, giving the Tar Heels a breathable 2-0 lead. It was one of the few decisive moments in an otherwise tense contest. North Carolina took its two goals well, capitalizing on first a loose ball and then a kind rebound to find the net twice. Notre Dame offered some attacking moments on home soil, testing Emmie Allen with a peppering of shots on either side of half time. But the Tar Heels managed the game with aplomb, keeping Notre Dame’s usual threat — the dynamic Korbin Albert — at arm’s length. With the attacking midfielder nullified, the Irish had few places to turn. All North Carolina needed, then, was a couple of fortunate bounces.

It was Reyna Reyes’ first touch that set things up. The Alabama midfielder snatched onto a loose ball in the box and could have lashed it with her right foot. Instead, she corralled the ball, shifting weight towards her left before slotting home under pressure. It was a moment of composure that ultimately stood as the difference between Alabama and Duke in their NCAA Tournament last eight clash. Alabama dominated most of proceedings and appeared to be sitting comfortably on a 2-0 lead in the 75th minute. But Michelle Cooper struck twice in quick succession for the Blue Devils, leveling the game at 2-2 with 10 minutes to play. Alabama probed for a winner at the end of regulation, and eventually found it in extra time thanks to Reyes’ composed finish. The win sent Alabama to its first ever College Cup,

Jenna Nighswonger has delivered the same corner all season. It starts around the six yard box, appearing certain to drop in front of the goalie. But then, at its apex, the ball swerves and dips, seeking out the back of the net. That service has contributed a few of the Florida State midfielder’s many assists this year. And on Saturday night, it worked again, deflecting off an Arkansas defender for the only goal of the Seminoles’ 1-0 win. They perhaps should’ve had more, with Jody Brown and Onyi Echegini threatening throughout with neat runs and angled shots. But the Arkansas defense kept it in the game. Nighswonger’s deflected delivery was deserved, but it was an outlier in an otherwise resilient defensive showing. And Arkansas’ rear guard action set things up for a tense last few minutes, with the Razorbacks pushing for a winner. But in those tricky moments, Florida State’s depth showed, with Cristina Roque making two key saves and the defense in front of her diverting attacking attention to send the Seminoles through. Much had been made before the season about new head coach Brian Pensky’s ability to lead an unfamiliar team. Against Arkansas, he showed exactly why he was the right man for the job.