For some teams, it’s the chance to land a big win to put on an at-large bid resume. Others are trying to one-up their rivals and make a run at a conference regular season title.

Lots of games carry those stakes, but here’s a look at five ones of note. 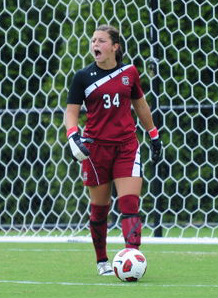 The ACC games are coming thick and fast now, and the race for the regular season conference title means that every game against top programs means all the more. The Demon Deacons make the trip to Indiana and face an Irish squad that looks like possible national title contenders. Moving Cari Rocarro up front could be the new key for Notre Dame, while Mandy Laddish and Morgan Andrews patrol the midfield. The key going up against Wake Forest is slowing down Katie Stengel, as the All American forward makes their attack tick.

Last year’s struggles seem to be long in the past for the Gamecocks, who have been riding high for most of the season. They don’t possess a dominant attack with timely goals coming from Danielle Au and Raina Johnson, but they’ve tasted success through the defense. Goalkeeper Sabrina D'Angelo has eight shutouts in 11 games and has allowed just four goals so far. The big task will be shutting down Florida’s attack, led by freshman forward Savannah Jordan (11 goals, one assists) and Havana Solaun (four goals, two assists). The Gators are going to be eager to bounce back after losing 1-0 on Sunday against Missouri.

As Penn State chases yet another Big Ten regular season title, a resurgent Wisconsin side has its eyes on a big upset this weekend. In order to get the better of the Nittany Lions, the Badgers will need to put together a comprehensive defense effort. Behind Raquel Rodriguez Cedeno and Maya Hayes, Penn State’s offense current ranks second in the nation according to goals scored, with 37 thus far. This one is likely to be a high-scoring affair as Kinley McNicoll, Cara Walls and Rose Lavelle supply talent in the offensive third for Wisconsin.

While the Cougars’ schedule hasn’t been the most challenging in Division I soccer, going 10 games unbeaten doesn’t happen every day. That, plus the early days of the Pac-12 make this an intriguing fixture, as Washington State can pick up a statement win that will certainly boost its RPI. And last season the Cougars also visited LA, coming out with a 0-0 draw at the time. Micaela Castain’s 10 goals in the first 10 games is a large part of early success and she’ll have to keep firing for the Cougars to get a result. The Bruins will come at them with their slew of weapons, including midfielder Sam Mewis, forwards Darian Jenkings and Taylor Smith looking to lead the team to a home win.

Credit where it’s due: the Tigers, after bringing in a quality group of recruits, has three wins in ACC play this season, which is more than they’ve had the past two seasons combined. Goalkeeper Kailen Sheridan is a stalwart behind center back Claire Wagner, the pair just two quality freshmen who have buoyed the Tigers to their new start. How will they stack up against the Cavaliers? Behind Mackenzy Doniak and Morgan Brian, Virginia is rolling and comes into this game off a week of rest. It’s going to be an uphill battle for Clemson, but opportunity knocks to pick up a result, which would continue the turnaround season.

The season has started off well for Connecticut in its new conference home, winning twice on home turf and possessing a 2-0-0 record early on. The Huskies face a tricky Florida road trip, visiting South Florida and UCF this weekend with an opportunity to keep a strong start going. Freshman Rachel Hill (nine goals) has been the focal point of the offense, and a key to coming away from this road trip with full points.