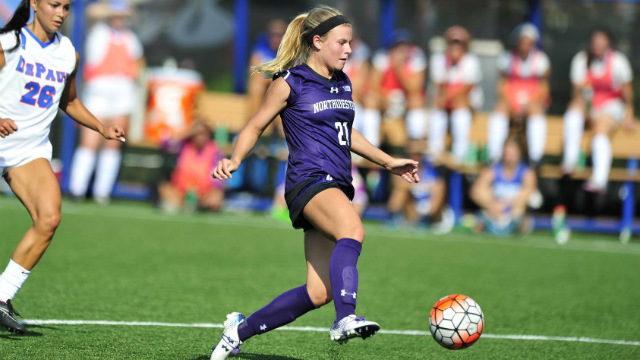 The schedule of remaining regular season games is shrinking on the Division I women’s slate. Halloween weekend marks the start of conference tournaments in some corners of the country, while other conferences play out their final games of the season.

Below are the games and players to keep an eye on this weekend.

A Big East regular season title is one the line this weekend between the Red Storm, DePaul and Georgetown. With the latter two tied for second with a 5-1-2 record, St. John’s controls its destiny, and a win would clinch first place. A draw would open up the possibility for a three-way tie. Bet on high-scoring English star Rachel Daly to get the job done against a tricky

Two of the elite programs in the ACC meet at Alumni Stadium with victory on the mind. There’s no danger for either side to miss the NCAA tournament, given the strength of each team’s RPI, but an ACC tourney spot is at stake. A win would secure a top four finish for the Hokies and nudge them up the RPI rankings. The Irish are in seventh play, three points behind North Carolina and Clemson in the standings – a spot in the ACC tournament is unlikely. But a win at home would be much-needed momentum, and inject their own RPI, increasing the chances of a top four tournament seed.

One of these teams will see their 2015 campaign come to a close in Harrisonburg in a CAA quarterfinal. James Madison, which leans on the scoring ability of Ashley Herndon. Northeastern won on its last visit to Virginia at the beginning of October – can they do it again and book a spot in the conference semifinals?

Plenty is riding on this game from an NCAA tournament perspective as the Wolverines make the trip to Evanston to battle the Wildcats in a Big Ten quarterfinal. Anything short of a win could end up knocking Michigan off the bubble, given their No. 49 RPI at the beginning of the week prior to a mid-week defeat at Penn State. Ani Sarkisian and Taylor Timko have been critical figures in the offense and need to come through with a big game. Northwestern is on the cusp of a tournament spot, especially after they were able to come through with a win against Wisconsin on Wednesday. Addie Steiner continues to get the job done, with seven goals and sevens assists this year.

The longest winning streak in the nation belongs to GW, after surviving an overtime road battle to win 2-1 against Rhode Island on Thursday, extending its winning streak to 12. Junior forward Mackenzie Cowley scored her fifth game winner of the season against the Rams, and freshman Sofia Pavon has added four of her own. Sunday's matchup at home doesn't have much riding on it in terms of postseason impliactions, as GW has already run away with the Atlantic 10 regular season title. But it's worth keeping an eye on to see if the Colonials can make it a lucky 13 straight.

Mimi Asom, Princeton – The exciting freshman phenom has already enjoyed a spectacular season, helping the Tigers secure the driver’s seat in the Ivy League. Saturday sees Princeton visit surprise package Cornell. Asom will be critical in breaking down what has been a stout Big Red defense this season.

Claire Wagner, Clemson – The Tigers need some help in order to make the AC tournament, sitting in fifth place, tied on points with North Carolina (which beat them last weekend). A win for the Irish in the aforementioned Hokie-Notre Dame clash would open the door for Clemson to finish in the top four. Wagner’s play at the back is always critical on the field, and it would be in Saturday’s regular season finale on the road at Syracuse.

Ali Schaffer, San Francisco – Hot on the trail of a WCC title, the Dons are in control of their conference fate, with three games to go. This weekend, a pair of road tests against Pacific and St. Mary’s (CA) is on the docket. Schaffer, who has played almost every minute at the back for USF, will be critical for them as they look to shut up shop and stay up front.