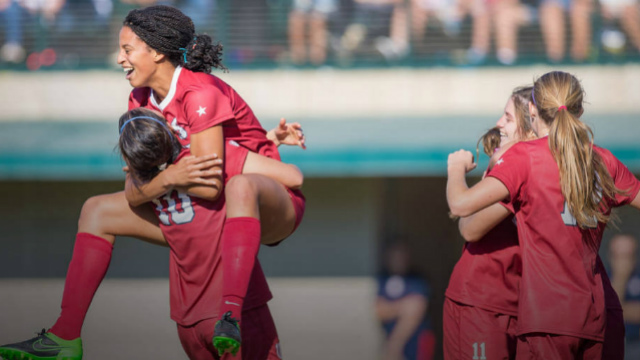 Klockner Stadium has been something of a fortress for Virginia in recent history, as the ACC program seeks a third straight trip to the College Cup. Ironically enough, Charlottesville was the site of the Cavs’ only loss this season, a 2-1 defeat in overtime in Notre Dame. So if Rutgers can travel south and figure out a way to pick up the win, it would be an impressive achievement, especially given all three of Scarlet Knights’ losses came on the road this season. However, if there’s a team that has the ability to beat UVA on its home turf, Rutgers’ back line of Brianne Reed and Erica Skroski, with Casey Murphy in goal, could shut the door on the Virginia attack. There’s enough up front as well, whether it’s Colby Ciarrocca or Cassie Inacio to threaten the vaunted Virginia defense.

The two teams met in the second round of the tournament last season, with the Cavaliers winning 3-0 on the day. If the prolific Virginia offense – that’s scored 73 times this season – find a way to get on track via Makenzy Doniak and Alexis Shaffer, the opportunity to continue its season will be there for the taking.

Can the Aggies slow the Seminoles down? Both teams are seeking a return to the College Cup. For Head Coach Mark Krikorian and his vaunted ACC program, it would be five straight trips to the final four, while G Guerrieri and the Aggies made their first appearance last year. On paper, the Seminoles are favorites, given the team’s blend of experience and talent. Megan Connolly and Cheyna Williams have combined for 17 goals and can give any defense trouble. The Aggies have done an incredible job to get this far after losing nine starters from the 2014 College Cup squad, and make a second trip to the Seminoles' home turf in 2015.

Texas A&M’s run to this point has been buoyed by a slew of freshmen and sophomores, including Haley Pounds, Emily Bates and Ally Watt up front. Transfer Danielle Rice has settled in as the starter in goal, providing experience at critical moments. The biggest issue for A&M to contend with is the suspension of Mikaely Harvey. The sophomore sensation was sent off in overtime during the third round shootout win against Mississippi, and her absence will b a blow to A&M’s ability to win the battle in the midfield. FSU hasn’t lost a game in Tallahassee all season, posting an 11-0-2 record, and have the formula to extend that streak on Friday.

Duke’s ACC-tested side hops on a plane to Palo Alto with the aim of knocking off the Pac-12 champs. It’s going to be a tough task, even with the Cardinal nursing injuries to Stephanie Amack and Tegan McGrady. Even if that pair can’t make it, there’s quality all over the field that Duke must contend with, from Andi Sullivan and Kyra Carusa in the midfield, Maddie Bauer and goalkeeper Jane Campbell in goal. This Stanford team might not have the offensive star power of past editions, but the collective is as good as any other team in the nation.

A pair of freshmen has been crucial to Duke’s success in the final third, as Kayla McCoy and Taylor Racioppi have done a lot of the damage offensively. They’ll need to be fit and firing in order to break down Stanford’s stout defense, while Rebecca Quinn and Christina Gibbons have the defensive quality to keep the Blue Devils in the game.

The other quarterfinal meeting that provides a rematch of a regular season encounter, West Virginia edged Penn State 1-0 back on September 4 in Morgantown, one of the Mountaineers’ biggest wins of the season. The task now for the Big 12 regular season champs is to edge the Nittany Lions on their home turf, site of just one loss for PSU this season.

Penn State rolls into this one in firing form, the highest scoring team in the tournament’s first three rounds, outscoring opponents 16-0. Contributions have come from everywhere, as Raquel Rodriguez, Mallory Weber, Megan Schafer, Frannie Crouse and Emily Ogle are dangerous weapons that have generated offense for PSU and will pose a threat to West Virginia. The Mountaineers counter with one of the best center backs in DI soccer in Kadeisha Buchanan, but it's going to take a total team effort to slow down the in form Nittany Lion offense. Keeping things tight will be a critical element to this encounter. WVU has the attack to keep it close, as Kailey Utley, Michaela Abam and Ashley Lawrence offer plenty of quality, but if this becomes a high-scoring game, it obviously favors the hosts.