Despite losing for the very first time, #3 Florida State locked up the top seed in the ACC tournament and a regular season title over the weekend.

After losing 3-2 on the road to Boston College last Thursday, the Seminoles bounced back and edged an undermanned Maryland side 1-0 in College Park. That win secured enough of a gap in the standings for the Seminoles to officially clinch the regular season title.

“We have shown to be consistent over my eight years which is really important for us," FSU head coach Mark Krikorian said in a release on clinching the league regular season title.

"We don't want to be a one-year wonder and we have proven that with a conference tournament championship last year, a regular season championship in 2009 and now again this year. I think that is a fairly strong statement about the health of our program. We are going to continue to fight and hopefully get better after every game."

The accomplishment means that FSU starts next week’s ACC tournament as the No. 1 seed, and marks just the second time ever the program has won the ACC regular season (the last time coming in 2009). 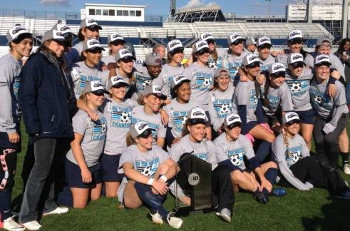 A few more games are on slate this week in the ACC before the conference tournament begins, so the field isn’t quite set. But for now, Florida State can bask in the success of another impressive accomplishment.

Michigan gave #5 Penn State a bit of a run for their money in the conference race, but in the end, the Nittany Lions did enough to win yet another Big Ten title under head coach Erica Walsh.

"I am so proud of this group," Walsh said in a press release. "I am so proud of where they are today and where they came from. There is a lot of emotion surrounding Senior Day. This is just a fantastic group of young women that are prepared to go out and succeed in their chosen field, but not yet because we still have a little more work to do."

While the Wolverines and Nittany Lions tied 1-1 on Sunday, Michigan’s loss to Ohio State on Thursday combined with PSU’s 5-1 win over Michigan State on Friday paved the way for the Nittany Lions to clinch.

That doesn’t diminish what has been a very good season for Michigan, currently ranked #21 in the TopDrawerSoccer.com Top 64. They’ll look for a measure of revenge when the Big Ten tournament begins.

One of the other premier conferences in the season wrapped things up over the weekend, as the Big East conference tournament field is now set.

Some teams finished stronger than others. On Friday, #9 Georgetown dropped its first game of the season, 1-0 on the road to Villanova. However, the top seed in the National Division was already sewn up at that point, so the Hoyas held on despite #8 Notre Dame picking up a win in its game.

On the other side of the conference, #7 Marquette finished extremely strong with a 4-0 defeat of South Florida. The Golden Eagles hold the other top seed after topping the American Division.

Princeton continues to lead the way in the Ivy League

It’s been quite the bounce back season for #38 Princeton, and their Ivy League dominance continued over the weekend with a 3-1 win over Harvard. Forward Jen Hoy maintained her prolific scoring rate, bagging her 16th goal of the season in the process.

Trailing Princeton in the standings are Penn and Dartmouth, both three points off the top, ahead of USF, Syracuse and Connecticut.

Their astounding win streak may have ended, but #45 Navy took their recent tie in stride and continue to roll. Away wins over Army (1-0) and Holy Cross has the Midshipmen in first place in the Patriot League, and poised for a conference regular season title.

Navy’s season wraps on Saturday against Bucknell, and a win would secure first place and a chance to host the upcoming conference tournament.