The dominance of #4 Penn State in the Big Ten has been rather remarkable of late. Is a surprise #26 Michigan team about to make a push at the regular season title?

The two sides won’t meet until October 21 in State College, Pa., but for the time being both are neck and neck for the race for first place in the Big Ten. The Nittany Lions currently sit in first with a two-point lead.

Nothing changed over the past weekend of action either, although Penn State survived a scare against a plucky Indiana side. The two teams exchanged a pair of goals in the first 60 minutes of the game, leaving the score tied at 2-2 with a half hour left. But the Nittany Lions offense roared to life in a six-minute span, as Mallory Weber scored twice and Maddy Evans added the final goal in a 5-2 win. 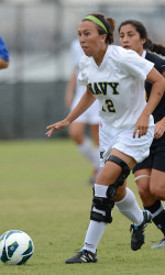 Taking to the road, Michigan got past Northwestern by a 2-0 score, as Nkem Ezurike accounted for both of the Wolverine goals.

Will both still be undefeated in the conference when they meet? If all holds serve, then it would be some matchup – but there is still a ways to go before both get all the way there.

In need of a big ACC win away from home, #5 Wake Forest found themselves behind early after #12 Virginia scored through Olivia Brannon.

But the Demon Deacons showed their quality in Charlottesville, scoring twice in a three-minute span in the second half to engineer a 2-1 win at Klockner Stadium.

“The first half, we got played off the field,” Wake Forest head coach Tony da Luz said in a release. “We turned it around, we got the goal, and I thought the game kind of changed. It was a great finish by Jackie (Logue) off of a great free kick by Marisa (Park), and the penalty was perfect - Kristen did a great job finishing."

Wake followed up that result with a 1-1 draw against Kansas back at home.

Eyeing an eighth straight win, #6 Notre Dame came up short of that mark thanks to a 2-2 draw against Big East foe Rutgers on Sunday.

A bumpy start to the season for the Irish seems to be long in the past, and the young side continued to show impressive progress. Freshman forward Crystal Thomas bagged both goals against Rutgers, but saw tallies from Stefanie Scholz and Shannon Woeller deny the Irish a continued winning streak.

“Aside from the two goals we gave up, I thought we continued to show improvement and growth today," Notre Dame head coach Randy Waldrum said in a release. "We're creating good scoring chances and were probably a bit unlucky, between the crossbar, the post and a strong day from their keeper, not to have a few more goals on the board. This was good for us, to be tested and playing from behind, in some difficult weather conditions, and we answered that challenge pretty well, especially in the second half and overtime.”

Make that 15 games and counting.

That’s how many games #44 Navy has now won in a row this season, after picking up two more wins the Patriot League over the weekend.

It was far from easy of course, as Patriot games tend to be closely contested, and this was no different. After winning 3-2 against Lafayette on Friday, a dramatic overtime winner was required from freshman Kaylie Davidson to extend the winning streak with a 1-0 victory over Lehigh.

The Quakers and Tigers seem destined for a huge showdown later this season in the Ivy League. Both are now 3-0 this season in league play – Princeton is fresh off beating Brown 2-0 on Saturday, while Penn narrowly defeated Columbia 1-0 on Friday night.

There’s still a long way to go, with each team playing three other Ivy League games before a November 3 matchup that could potentially seal the league’s tournament bid. However, both Dartmouth and Columbia aren’t too far behind with records of 2-1.

Eagles fail to soar in Carolina

Making a trip to North Carolina for a pair of key ACC matchups, #23 Boston College saw the Eagles fail to come away with even a single point, dropping games to #16 North Carolina and #11 Duke.

Inflicting the damage last Thursday at Fetzer Field was Carolina’s Ranee Premji, who scored the only goal of the game as the Tar Heels won 1-0. Facing Duke on short rest proved to be no easier, and Kim DeCesare’s two goals helped the Blue Devils roll to a 4-2 win.

Kristie Mewis, our national #3-ranked player, had a goal and an assist in the loss, as Boston College has now dropped four of their last five games overall.