Women’s Team of the Week: April 20 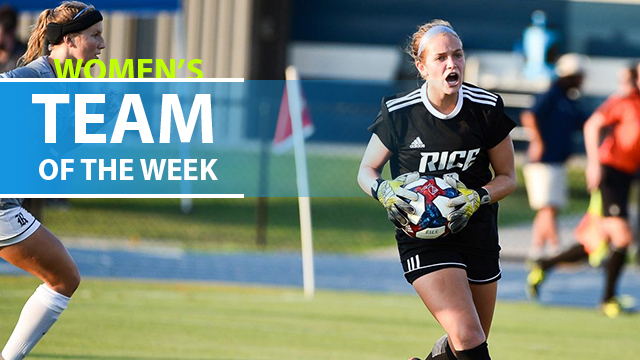 Rice goalkeeper Bella Killgore is a threat at both ends of the field.

It’s always noticeable when a GK leaves his or her goal to take free kicks, but Killgore fills that role for the C-USA side. She played a huge role in Rice’s march to the tournament crown this past week. In Tuesday’s first tourney game against Old Dominion, Killgore made eight saves, and converted a free kick in the first half.

She made a stop in the semifinal shootout after a 0-0 draw against Southern Mississippi, and had another clean sheet versus Charlotte on Saturday to secure a spot in the NCAA Tournament.

GK Bella Kilgore, Rice – In a week where she didn’t concede a goal, Killgore also bagged one of her own as Rice won the Conference USA tournament. Handling most of the free kicks for the Owls, Kilgore scored in a 3-0 win in Tuesday’s quarterfinal.

D Kayla Hodges, Elon – Elon’s CAA tournament title was perhaps the most surprising of the past week, as the Phoenix kept Hofstra’s high-powered attack in check. Hodges played at the back of both wins, 1-0 against the Pride and then a win over UNC Wilmington to punch Elon’s ticket.

D Cassidy McCormick, Utah Valley – The Wolverines punched their ticket with a 2-1 win in the WAC tournament final over the weekend. McCormick was named tournament MVP, converting the winning penalty in the victory over Seattle.

D Dalton Fish, Southeastern Louisiana – A junior from Texas, Fish anchored her side’s back line to three shutouts and a Southland Tournament crown. She played all 290 minutes over the past week as her side didn’t concede a goal.

M Mallory Mooney, Auburn – While not involved in any conference tournament action, Mooney’s hat trick against an ACC opponent (Virginia Tech) was more than deserving a spot. It marked another great performance from the freshman in 2020-21.

M Elyssa Nowowieski, Campbell – Nowowieski was named Tournament MVP after scoring two goals in the first 10 minutes in the Big South Championship title game on the road at High Point. Her two goals propelled Campbell to its first automatic bid to the NCAA Women's Soccer Championship since 2004, as her side held on a for a wild 4-3 victory.

M Hannah Friedrich, Saint Louis – The stellar A-10 season for the Billikens continued into the tournament, thanks in part to the junior. One of the nation’s top goal providers, she turned finisher this past week. She scored in both games, including the winning goal in the conference tournament final against Davidson.

F Jadyn Edwards, New Mexico – A pair of goals from Edwards, including the overtime winner, won the Mountain West title game by a 3-2 score against San Diego State.

F Meike Ingles, Iowa – The freshman scored the winner in Iowa’s big upset over Penn State, and assisted on Sunday’s winning goal for the Hawkeyes versus Wisconsin.

F Sydny Nasello, South Florida – Two goals from Nasello in the American Athletic title game ensured that there would be no stiff challenge against Cincinnati. South Florida finished as 4-0 winners.