Women's Team of the Week: August 24 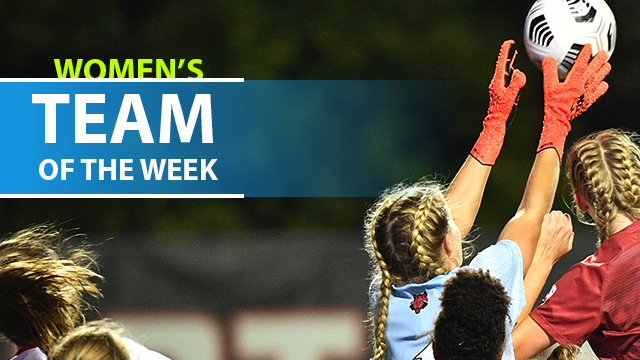 There’s nothing like a big performance from a goalkeeper to secure a vital result on the road against a Power 5 opponent.

The first TopDrawerSoccer Player of the Week nod for the women’s DI fall season goes to Megan McClure, who put together a stellar shift between the posts last week. She accomplished just that in Pullman last Thursday, as her Arkansas State side drew 1-1 against Washington State. McClure made nine saves, facing a total of 39 shots.

McClure also had a shutout in her team’s other game of the week, a 1-0 win against Eastern Washington. She headlines the first Team of the Week for the fall 2021 season.

TopDrawerSoccer Team of the Week: August 19-22

GK Megan McClure, Arkansas State – The fifth-year senior had an impressive start to her last season as she continues to set program records.

D Kirsten Pavlisko, Florida State – A strong start from the FSU defense saw the Seminoles secure shutouts against SEC foes. Pavlisko played the full 90 in wins against Alabama and Texas A&M, as the ACC side conceded just five shots across the two games and one on frame.

D Samar Guidry, Virginia – The attacking left back got forward with real danger in UVA’s win against Richmond and West Virginia. She was particularly effective in Sunday’s win against the Mountaineers, setting up Diana Orodonez for the winning goal.

D Jenna Butler, NC State – A win and a draw to start the season isn’t too shabby, especially as the latter came on the road against Georgetown. Butler scored goals in both, including the winner against Old Dominion on Sunday.

D Trinity Watson, Pepperdine – The senior player every minute of two wins against USC and San Diego State. After helping keep the shutout against USC, Watson also scored versus the Aztecs.

M Anna Haddock, Auburn – Haddock made a big case to be named Player of the Week, with three goals in Auburn’s two games. That included a brace against BYU on Saturday, a big home win for the SEC side.

M Hope Breslin, Illinois – Is this the year of an Illinois bounce back? Breslin made sure that the Illini enjoyed a great opening week, scoring four times in wins against Missouri and Illinois State. That included a hat trick against the Redbirds on Sunday.

M Mackenzie Pluck, Duke – It was a massive performance for Pluck, as she helped inject danger into the Duke attack. She won two penalties against Arkansas, converting one of them herself. In Sunday’s 2-1 win over Washington, Pluck had the winning goal and an assist.

M Nicolette Hernandez, Michigan – With an experienced team around her, Hernandez enjoyed a solid week. She had two assists in a 5-0 win over Butler to open up the season, and scored the winning goal in a 2-1 victory on Sunday against a good Bowling Green side.

F Zsani Kajan, St. John's – The grad student from Hungary had a massive week, scoring five goals in two games for the Big East side.

F Sarah Schupansky, Pittsburgh – A local standout making her Division I debut, Schupansky made a big impact for Pitt, scoring the winning goal in Sunday’s victory over Oklahoma State. She also had an assist in both games as the Panthers look to creep towards an at-large bid this season.