Women's Team of the Week: February 23 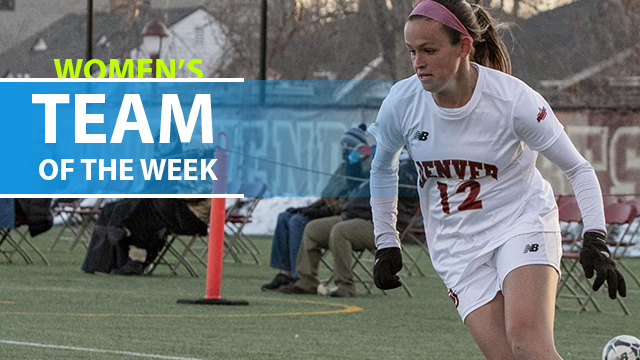 The nature of the spring season has led to a handful of schedule oddities.

In the Summit League, teams are playing two games against one another over the weekend, and it was the performance of Denver that yields the latest Women’s Player of the Week.

Forward Natalie Beckman led the Pioneers to a pair of wins against Oral Roberts, as she scored twice and setup three more goals in wins of 3-0 and 4-1. The junior has matched her season-high of goals in just five games, as she sits on four goals and four assists at this point in the spring season.

Check out some of the other best performances from the past week of action in women’s DI soccer.

GK Melissa Hoffheins, James Madison – Seven saves from Hoffheins ensured that JMU would come away with at least a draw in their first match of the spring season, a 1-1 draw at home with Liberty. Hoffheins made seven saves, and also demonstrated her importance with the ball at her feet, completing 71 of 73 passes.

D Macy Monticello, Wisconsin – The sophomore from Virginia played 90 minutes and anchored the Wisconsin back line in a 1-0 opening conference win against Iowa.

D Megan Wilson, Presbyterian – It was an opening conference win for the Blue Hose, defeating Radford by a 1-0 score. Wilson played the full 90 at the back, keeping the clean sheet and helping her side pick up the full points.

D Aleah Treiterer, Illinois – Opening up the Big Ten season with a 1-0 win, Treiterer went the distance in the shutout. She won 68% of her defensive challenges and made eight interceptions against Purdue.

M Anna Haddock, Auburn – Back in action for the spring portion of the season, the Tigers rolled past Kennesaw State by a 5-0 score on Friday. Haddock assisted on four of the five tallies, eclipsing her fall output in one fell swoop.

M Ava Collins, St. John's – Making her collegiate debut on Sunday, Collins scored a goal and added a pair of assists as the Red Storm won their first game of the season, defeating Albany 6-1.

M Katie Soderstrom, Butler – Soderstrom bagged a hat trick as the Big East side topped Dayton by a 4-1 score on Sunday night.

M Madison Murnin, UCF – Make it two wins from two American Athletic Conference games, as UCF stifled Cincinnati by a 1-0 score. Murnin helped the Knights control the game from her defensive midfield spot as the Bearcats mustered just three shots on the night.