Women's Team of the Week: March 23 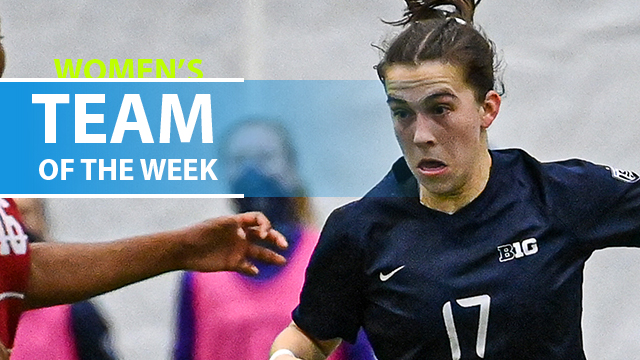 It’s safe to say that Penn State senior star Sam Coffey is making the most of her final year in college.

Coffey, who was a second-round draft pick by the Portland Thorns, has been in the midst of a strong final season for the Nittany Lions. The surge continued over the past week as Penn State extended its unbeaten streak to seven games. And it’s no coincidence that Player of the Week Sam Coffey continues to be at the heart of it all.

In a pair of home Big Ten matches, Coffey amassed two goals and three assists as Penn State beat Minnesota and Michigan by three-goal margins. She had a goal and assist against the Gophers, and then a goal and two helpers versus the Wolverines.

GK Angelina Anderson, California – Anderson’s standout performance in goal propelled Cal to a 1-0 win at Stanford. She made nine saves, including a penalty kick in the final minutes of the game to secure the program's first win against the Cardinal in eight years.

D Oliwia Wos, Indiana – The junior from Poland anchored a solid defensive effort from the Hoosiers, as they blanked Wisconsin by a 1-0 score and picked up a solid Big Ten win.

D Kimberley Smit, Memphis – An unbeaten start to AAC play continued for Smith, who scored the winning goal against Cincinnati in a 2-0 win, and then helped her side hang on for a 2-1 win on the road at Temple.

D Marz Akins, TCU – A dominant defensive effort led TCU to a 2-0 non-conference win against Oklahoma. Akins played the full game as her stellar freshman season continued. She anchored a team’s defensive effort that conceded just four shots the entire game, and none on goal.

D Shannon Cooke, LSU – Cooke played 180 minutes as LSU beat two Big 12 opponents. She scored the winning goals in each game as well, both 1-0 wins against Baylor and Texas Tech.

M Sam Coffey, Penn State – It’s no surprise that Coffey’s point streak coincides with Penn State’s unbeaten run. After she didn’t score or assist in the first game of the season, a loss against Rutgers, she’s either scored or assisted in every game since.

M Abbie Miller, Saint Louis – A huge week from the sophomore helped propel SLU to two more wins in Atlantic 10 play. She scored two goals, including the winning goal at Dayton, before setting up the lone goal of the game in a 1-0 win back at home against Duquesne.

M Delaney Schultz, Rice – Two great games from Schultz resulted in two wins for the Owls. The first saw the Conference USA side notch a massive win against Texas A&M. Trailing 2-0, Schultz started the comeback with a goal just before the half. After Rice goal another, Schultz assisted on the game-winning goal. She also scored in a 2-0 win over Louisiana Tech back in conference play.

M Mikayla Colohan, BYU – BYU blew away two opponents last week, winning by 4-1 against Utah Valley and then 5-0 versus Pacific. Colohan scored twice in the former, and then score and assisted twice in the latter.

F Shyra James, Colorado – The freshman bagged two game-winning goals in conference play. Last Monday, James scored the overtime winner in a 3-2, come-from-behind victory against USC at home. She scored in the sixth minute on Saturday in a 1-0 win over Utah.

F Esther Okoronkwo, Lamar University – Southland Conference domination continued for Okoronkwo and Lamar the past week. She assisted on two goals in a 2-0 win over Northwestern State, and then had a hat trick in a win against Central Arkansas. Okoronkwo has nine goals in nine games.