Women’s Team of the Week: November 16 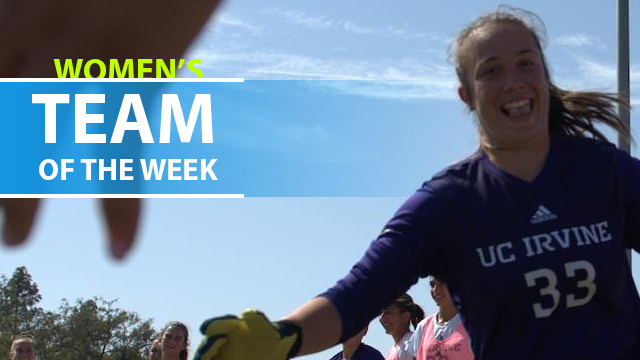 Tournament time is here, which means only a few weeks remains in the women’s Division I season.

Last week featured a handful of upsets, as seeded sides were tripped up in the first round. Perhaps the most substantial was UC Irvine’s 1-0 win against UCLA in Westwood.

Goalkeeper Glo Hinojosa played a major role in the upset, securing the latest women’s Player of the Week nod. She made seven saves, keeping her fifth clean sheet in a row, as UCI was able to hold on for the famous win.

Check out some of the other first-round standouts to land on the Team of the Week.

GK Glo Hinojosa, UC Irvine – It’s been a while since Hinojosa has conceded a goal, all the way back on October 24 in a 6-1 win against CSUN. The Big West side has won seven in a row.

D Morgan Wiese, Princeton – The only Ivy League side that survived the opening weekend, Wiese anchored a strong defensive effort at home in a 2-0 win over Vermont. She completed 88% of 73 pass attempts as well.

D Luisa Guttenberger, NC State – Heading on the road to face South Florida, the Wolfpack picked up an impressive victory by blanking the host side by a 2-0 score. Guttenberger completed 92% or her passes, per InStat, and won all six of her challenges.

D Reyna Reyes, Alabama – The outside back played every minute, helping contribute to a stellar 1-0 win against Clemson in the first round.

M Taylor Huff, Tennessee – SEC Freshman of the year in 2021, Huff put the game away for Tennessee in a 3-0 win. She assisted a goal in the 74th minute, and then score her own less than a minute later to make in comfortable in the end.

M Taylor Hattori, Wisconsin-Milwaukee – A tremendous season for the Panthers moves into the second round. Hattori tallied the game-winning goal in a 1-0 win over a very good Xavier squad.

M Korbin Albert, Notre Dame – Another freshman that came up huge, Albert scored two goals and setup another as the Irish comfortably avoided the upset. ND defeated SIUE by a 4-0 score.

M Hannah Friedrich, Saint Louis – An impressive win by the Billikens saw Friedrich provide heroics once again. She scored and setup another goal in a 2-1 victory on the road against Mississippi.

M Ava Collins, St. John's – Very little separated St. John’s and Brown in Saturday’s first-round matchup, until Collins popped up in overtime to score the game-winning goal. She also helped her side cope with Brown’s attack and keep a shutout until that point.

F Miri Taylor, Hofstra – The talented attacker helped push the Pride to a 3-0 win against a good Providence side. Taylor assisted her side’s second goal, and then scored the third to keep their season going.

F Tori Waldeck, Pepperdine – A hat trick of assists and a goal from Waldeck fired Pepperdine to a 7-1 win against South Dakota State.