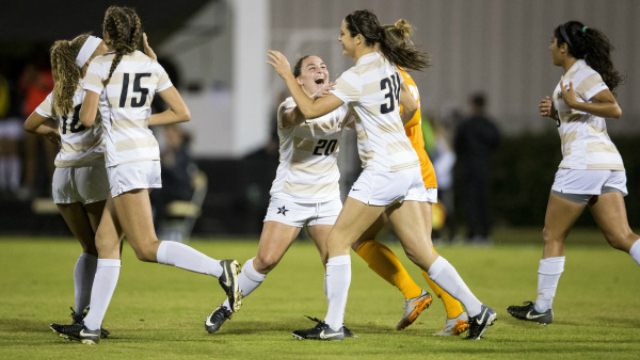 With games scattered around the country, the first round of the women’s Division I NCAA Tournament featured plenty of goals.

Upsets, however, were at a minimum, as all but two of the seeded teams survived through to the second round. One player that led her team to a win on the road is the Player of the Week.

After keeping things close in the first half, Vanderbilt defender Stephanie Amack broke a 1-1 tie with a goal from a corner kick with just over a minute left.

GK Lauren Clem, Northwestern – After 110 minutes, it came as no shock to see Northwestern and Butler tied at 0-0 on Sunday. Enter Lauren Clem. The shot-stopper delivered in the penalty shootout, making three saves to secure advancement for the Big Ten side.

D Jordan Branch, Washington State – Making the long trip from Pullman to Orlando, Branch led a stout defensive effort in a 1-0, smash-and-grab win. After the Cougars took an early 1-0 lead, the senior helped limit the damage in front of goal in the victory against a No. 2 seed.

D Stephanie Amack, Vanderbilt – Amack’s efforts to keep Vandy’s clash with Ohio State close paid off with her last-gasp winner. The graduate student transfer from Stanford will lead VU into a tough second round matchup against Santa Clara.

D MacKenzie Cerda, UCLA – When UCLA is playing well, Cerda’s forays forward from her left back spot are dangerous. That was the case in Friday’s 3-1 win over San Diego State, as she scored a goal and setup another one.

D Phoebe McClernon, Virginia – Played the full 90 minutes at center back in a 2-0 win against St. Francis (PA), limiting them to just a pair of shots on target.

M Cali Crisler, Arizona – The midfielder bagged the game-winning goal in the 81st minute as the Wildcats edged a close encounter against TCU.

M Kelsey Turnbow, Santa Clara – Now winners of eight straight and a path to the quarterfinals in sight after defeating Cal by a 2-1 score on Saturday. Turnbow’s finish stood up as the winner in the 65th minute.

M Laura Freigang, Penn State – The German youth international is playing well at the right time. Always going to be heavily favored against Stony Brook, Freigang ensured that there would be no nerves, scoring a hat trick in a 7-0 victory.

F Cyera Hintzen, Texas – A sophomore standout for the Longhorns, Hintzen scored twice, including the winning goal, in a 3-0 victory over North Texas.

F Brianne Folds, Auburn – The sophomore forward accounted for the game-winning goal against Hofstra, in a 1-0 victory for the SEC side.

F Natalie Jacobs, Notre Dame – Jacobs erased any chance of a nervy, low-scoring clash, scoring in the 18th minute on the way to a 5-0 win over IUPUI. She also assisted on ND’s third goal of the game.