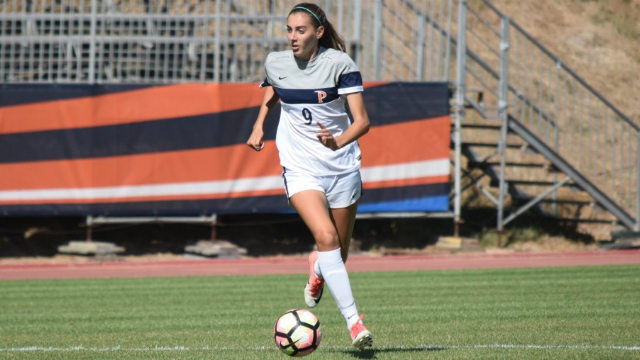 Voted to finish third in the 2017 WCC preseason coaches’ poll, the Pepperdine women’s soccer team is three wins from finishing the season with a perfect conference record.

The Waves answered their most demanding challenge of the season, playing two games in three days on the road, including a trip to Provo, Utah to face BYU.

And it was a freshman that made a big difference. De Anza Force product Joelle Anderson continued to spark the Waves, as she scored both goals in a 2-1 win over the Cougars. She also scored and had an assist in Saturday’s 3-0 win at previously undefeated (in WCC play) San Diego.

There were several other impressive individual efforts over the past week of women’s DI play.

GK Gabrielle Kouzelos, Louisville – Across two 0-0 draws against Wake Forest and North Carolina, Kouzelos made a combined nine saves, playing 220 minutes of action as the Cardinals picked up a couple of points.

D Ali Smith, Drake – The defender netted the game-winning goal in a wild 3-2 win against Illinois State that secure the MVC regular season title. Her 93rd minute strike in the first overtime clinched the win and a crown.

D Stacie Moran, San Diego State – Moran backstopped a pair of victories for the Aztecs, defeating Wyoming 2-1 and blanking Colorado State by a 3-0 score on Sunday.

M Joelle Anderson, Pepperdine – With her massive week, Anderson is now second on Pepperdine with seven goals and four assists. A reserve player for most of the season, expect to see her start the final three regular season games as the Waves look to win the WCC.

M Sammi Fisher, Notre Dame – Led the Irish to a pair of wins, with two key goals, including the winner, in a wild 4-3 win against Florida State.

F Ryan Reilly, Binghamton – Scored a goal and an assist over the past week, including the game-winning goal in overtime against Maine. It helped secure a share of the regular season title for Binghamton.

F Lourdes Onwuemeka, Wisconsin-Milwaukee – Onwuemeka led the Panthers to a pair of big wins last week. After a two-goal effort in a 6-0 win over IUPUI, she assisted on both goals in a 2-1 defeat of Youngstown State.

F Catarina Macario, Stanford – The freshman’s sensational season continued, as she scored three and setup three in huge wins against Oregon and Oregon State. She now has 12 goals and nine assists on the season.