Women’s Team of the Week: October 19 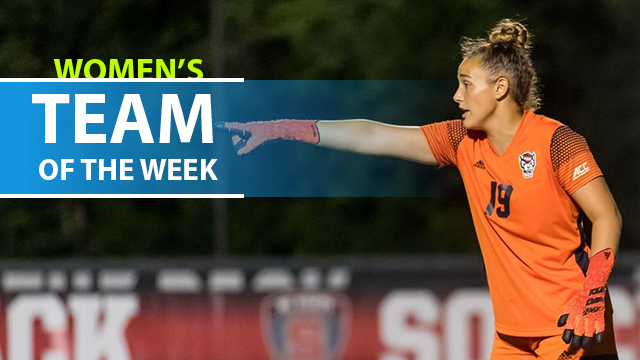 For teams hoping to earn an at-large bid to the NCAA tournament, late season games against prominent conference opponents can offer a make-or-break chance.

Facing rivals North Carolina, a strong effort in goal by Maria Echezarreta helped NC State keep a clean sheet in a 1-0 win against the Tar Heels. The Spanish goalkeeper earns the latest TDS Player of the Week nod, and boosts the Wolfpack to No. 24 in the latest RPI, while also providing a marquee win for the resume. Echezarreta made nine saves, ensuring that Jameese Joseph’s goal stood up as the winner.

GK Maria Echezarreta, NC State – Just when the season looked to be drifting away, NC State has spun off three straight wins against Duke, Louisville and North Carolina. Echezarreta’s shutout was the team’s first since September 9 against Oklahoma. It couldn’t have come at a better time.

D Lilly Reale, UCLA – The freshman defender had a massive game in a big Friday night matchup at Oregon State. Reale scored a goal and setup another in a 4-1 win against the Beavers.

D Brenna Brosam, TCU – Two road games, two wins for TCU as the battle for the Big 12 regular season title hits a crucial stretch. Brosam started and played 90 minutes in a 1-0 win against West Virginia, and played 81 in a 3-0 win on Sunday over Iowa State.

M Katie Kitching, South Florida – Kitching provided the winning goal in South Florida’s close 1-0 clash on the road at Memphis. It was a massive win and will lift USF’s tournament chances.

M Jaelin Howell, Florida State – Another impressive performance from the Seminoles, Howell and FSU traveled to Blacksburg and picked up a solid 2-0 win over the Hokies. Howell bagged a goal and locked down the midfield to pick up a clean sheet.

M Avery Murdzek, South Dakota State – The freshman continues to earn time for the Summit League side, which is now unbeaten in nine games. Murdzek assisted the third goal in a 3-0 win over North Dakota State from the bench, then started and scored what turned out to be the winner in a 2-0 defeat of North Dakota. SDSU is now 14-1-1 on the season.

M Alexa Spaanstra, Virginia – With a goal and assist, Spaanstra helped UVA nab another win and keep pace in the standings with Florida State. Spaanstra scored the first and her curled cross was emphatically headed home by Haley Hopkins as UVA defeated Notre Dame 2-1.

F Jordan Canniff, Penn State – Injuries have depleted the Nittany Lions significantly this season. But Canniff has been able to contribute from the bench as Penn State has clawed its way back towards a potential at-large bid. She scored twice last week in a 3-0 win over Indiana, and then again off the bench in a much-needed 2-1 defeat of Purdue.

F Jessica Donald, Campbell – Two conference games yielded two massive wins for the Camels. After Donald scored and assisted in a 7-1 win over Hampton, she scored two and setup two more in a 6-1 defeat of Gardner-Webb.