Women's Team of the Week: October 20 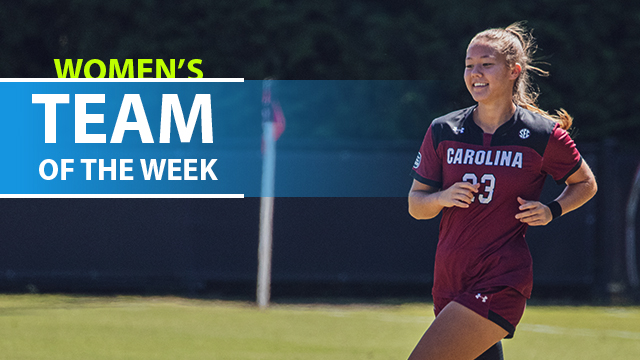 The race for top honors in the SEC is getting intense.

Prior to the weekend, it looked like Arkansas would run away with the top overall seed in the conference. But perennial power South Carolina went on the road and found a way to top Arkansas by a 2-1 score.

The game-winner came off the foot of Samantha Chang, who kept her composure in front of goal after the two teams traded a goal apiece from defensive miscues. The Canadian’s goal stood up as the difference in a game where little separated the two teams. Chang’s goal nabs her the Player of the Week honors for women’s Division I soccer.

1⃣ - Win the ball on the defensive end
2⃣ - Deliver on the offensive end
3⃣ - Take over 1st place in the @SEC 🙌@sammy_c23 | #NCAASoccer pic.twitter.com/eXcDkBThcQ

Check out some of the other top performances from the past week of action in women’s DI soccer.

GK Hensley Hancuff, Clemson: A 10-save outing against Notre Dame ensured that the Tigers would secure a very close 2-1 win on the road against Notre Dame. Hancuff’s enjoyed a career awakening after transferring to the ACC side, having battled injuries at her first stop at Villanova.

D Myra Konte, Vanderbilt: It’s been a roller coaster through five games so far for the Commodores, which was on an upward trend on Sunday as they defeated Florida by a 2-1 score in overtime. Konte accounted for the winning goal in the second overtime, helping keep her side in the game after Florida opened the scoring late in the first half.

D Gabrielle Robinson, West Virginia: Now winners of three straight, Robinson continues to impress at the back for the Mountaineers. A solid defensive effort in a 2-1 win against Baylor was punctuated by the game-winning assist, as Robinson threaded a through ball for Stefany Ferrer-vanGinkel’s winner.

D Silke Bonnen, Kansas State: The Danish defender helped Kansas State to its first shutout win in Big 12 play in program history. Handling three of her team’s four corner kick, she assisted on the game’s winning goal in a 3-0 victory over Oklahoma.

D Sarah Houchin, Auburn: Captaining Auburn’s back line in two games last week, Houchin helped her side pick up a pair of 1-0 victories to get their SEC schedule on the right track.

M Samantha Chang, South Carolina: Thanks in part to the win sparked by Chang’s crucial goal, the Gamecocks are surging in the SEC standings, now tied for first place with the Razorbacks in the overall regular season race.

M Barbara Olivieri, Texas A&M: The freshman from Texas had another big impact in her team’s game. She scored twice, including the winning goal, in a 3-0 win against Mississippi at home in College Station. Olivieri completed 80% of 30 passes, and created a chance as well.

M Payton Crews, TCU: A quick two goals from TCU in the game’s first 10 minutes stood up as the difference in a 2-0 win against a struggling Texas Tech side. Crews assisted on both tallies.

M Clara Robbins, Florida State: The Seminoles traveled north and scored eight times in two games to come away with the full points against Pittsburgh and Virginia. Robbins was of particular importance against the Cavaliers, scoring two goals, including the game winner from a corner kick. Her six tackles in Charlottesville was also second-highest on the team.

M Ceri Holland, Kansas: In a highly anticipated Big 12 matchup, Kansas eked out a 1-0 win, thanks to a goal from Holland from the spot. She made 10 interceptions from her defensive midfield spot, locking down the Cowgirl offense.

F Delaney Graham, Duke: The junior scored the overtime winner last Thursday against Boston College, as Duke picked up two road wins. She also assisted on one of Duke’s goals in Sunday’s win over Syracuse.