Looking like the first loss was on the immediate horizon, Stanford forward Courtney Verloo came through in the clutch to lead the Cardinals to a come-from-behind win on Sunday night.

Verloo scored a penalty in the last minute and then bagged the winning goal on a free kick in overtime, as the Cardinal erased a 2-1 deficit to win 3-2 over Santa Clara.

Coming through in the clutch in that fashion secures TopDrawerSoccer.com player of the week honors for Verloo. Here’s a look at the rest of the top performers over the past week: 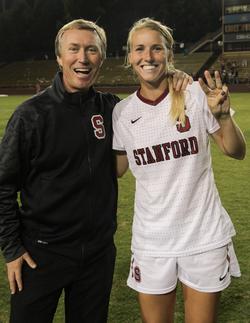 GK Kelsey Wys, Florida State: Two games, two shutouts, and 11 total saves for Wys, including a 1-0 blanking of North Carolina last Wednesday. The standout shot stopper corralled nine shots on goal against the rampant Tar Heel offense, and then followed that up with a couple of big stops on Sunday against NC State.

D Allie Sirna, Tennessee: An experienced center back, Serna was at the heart of Tennessee’s 1-0 win over Texas A&M on home turf Friday night. Serna helped limit a dangerous Aggie attack to just four shots on goal as the Volunteers notched a massive win in SEC play.

D Jodie Zelenky, Virginia Tech: The defender played all 180 minutes in a pair of massive ACC road wins for the Hokies – first a 2-0 win over Maryland on Thursday evening, then a 1-0 defeat of Boston College on Sunday.

D Whitney Church, Penn State: While her side struggled to keep Northwestern at bay in Friday’s Big Ten opener, Church rose to the occasion at the other end of the field, scoring twice, including the game winning goal in overtime to secure a 3-2 win over the Wildcats up in State College, Pa.

MF Samantha Witteman, California: The sophomore jumped off the bench to bag a hat trick in Cal's 4-2 win over St. Mary's (CA), as the Golden Bears continued their hot start to the 2013 season.

MF Alli Murphy, Texas Tech: The midfielder played an integral role in Texas Tech’s two wins over the weekend, as she scored two goals, including a game winner, and notched an assist as the Red Raiders topped UC Davis and UC Santa Barbara by a combined score of 5-0.

MF India Robinson, Furman: Robinson helped her Furman side to a pair of victories this past weekend. She assisted on both goals in a 2-0 win at North Florida and setup Stephanie DeVita's equalizer in an eventual 2-1 overtime triumph at Jacksonville.

F Makenzy Doniak, Virginia: The sophomore forward continues to heat up for the Cavaliers. Last Thursday, she scored the tying goal and then assisted on the game winner in a 2-1 defeat of Boston College. For a Sunday encore in Pittsburgh, she tallied twice, including the game winner, raising her goal total on the season to eight and continuing UVA’s hot start to the season.

F Courtney Verloo, Stanford: Along with her hat trick heroics on Sunday against Santa Clara, Verloo setup a pair of goals in a 5-0 win over St. Mary's (CA) earlier in the week.

F Darian Jenkins, UCLA: The former U17 WNT standout continues to excel for the Bruins, and she scored two more big goals for UCLA. Jenkins notched two game winners in victories over Pepperdine and Loyola Marymount, raising her team-leading total to seven on the season in nine games.

F Rafaelle Souza, Mississippi: A hot start to the season for Souza spilled over into the first SEC match of the season, as the Brazilian bagged a brace in a 2-1 win over Arkansas on Friday. She scored two more times on Sunday, tallying in the game’s first ten minutes leading the Rebels to a 3-0 victory over Arkansas Little Rock,