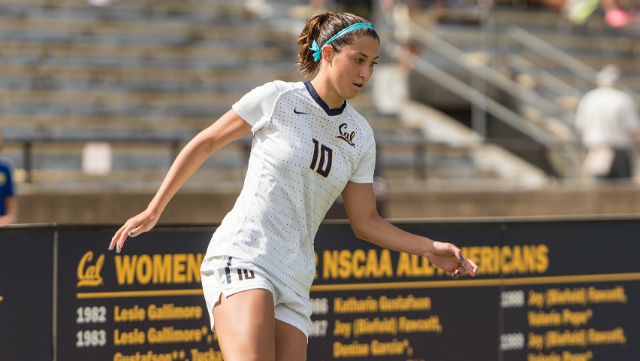 Over the first few weeks of the season, the women’s college soccer season has already served up some tantalizing matchups and epic battles. This week’s Team of the Week representatives were at the heart of the recent success, whether offensively or defensively.

One player’s star offensive shift on a road trip out east nabbed Player of the Week honors as well.

If you would like to submit a player for the Team of the Week, please email college@topdrawersoccer.com.

GK Kelsey Tierney, Cornell – The Big Red have yet to concede a goal in 2015 through four games, and Tierney was solid in net once again, make a total of five saves in wins over Cleveland State and Akron.

D Greta Espinoza, Oregon State – The Mexican international’s jump to the Division I ranks, as she continues to be a big part of the Beavers' 4-0-1 start to the season. She played every minute as OSU’s strong start to the season continued with a 0-0 draw against Missouri and a 1-0 win against Kansas.

D Melanie Fox, Long Beach State – It was a good weekend for the senior center back, who played 177 minutes across two games, helping LBSU to a pair of clean sheets in a 0-0 draw against San Diego and a 6-0 defeat of Portland State.

D Erica Skroski, Rutgers – Amazingly, the Scarlet Knights have yet to concede a goal this season, winners of six straight after a pair of 3-0 wins over the past week. Skroski played in all but 13 minutes of those victories, notching an assist in a 3-0 defeat of Drexel.

D Kala Faulkner, Auburn – Like Rutgers, Auburn has yet to concede a goal this season. The All-SEC performer Faulkner played another 180 minutes of soccer in two shutout wins over Samford and Old Dominion.

M Megan Connolly, Florida State – All signs are that FSU head coach Mark Krikorian has identified yet another talented Irish player in Connolly. The midfielder scored and had an assist in FSU’s come-from-behind win at home against Texas A&M. Krikorian's offered high praise to his newcomer, indicating she has the potential to be as good as FSU legend Dagny Brynjarsdottir.

F Anna McClung, Tennessee – With the loss of Hannah Wilkinson, players like McClung need to step up offensively. The junior did just that over the weekend, scoring in a pair of comfortable wins over Navy and Murray State.

F Arielle Ship, California – A huge weekend for Ship nets her Player of the Week honors. On the road in Durham for matches with North Carolina and Duke, Ship had a hand in all four goals for the Bears, scoring twice and adding two assists. She was named the Duke Nike Classic Offensive MVP.

F Alani Johnson, Virginia Tech – Other Hokie attackers carry a high profile, but the sophomore stepped up big time last week. After tallying once in a mid-week win over Longwood, Johnson scored a brace, including the winning goal, in a 3-0 defeat of VCU.