Women's Team of the Week: September 11 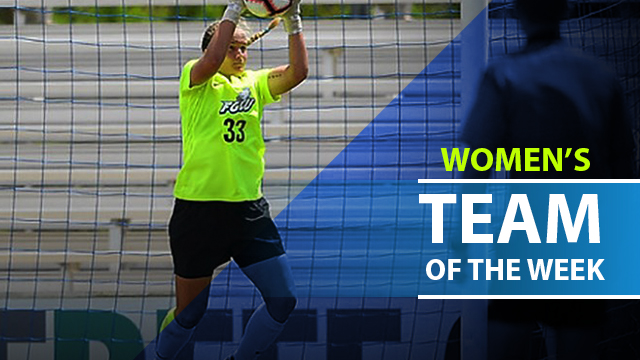 Even at this point in the season, road wins can be crucial for building a program’s confidence.

Florida Gulf Coast(w) nearly pulled off two victories while making a trip to Ohio over the weekend, settling for a win and a draw without conceding a goal.

Goalkeeper Melissa Weck, this week’s Player of the Week, played a big role in that. Weck made seven saves across two games, including six in a 1-0 win against Ohio State on Friday. She also played 110 minutes as FGCU drew 0-0 with Dayton to wrap up the two-game swing.

Weck is joined by several standout performers on the Team of the Week, covering the past week of action in Division I women’s soccer.

Team of the Week: September 3-9

D Phoebe McClernon, Virginia – Virginia made it seven wins from seven with two more victories over the past week. McLernon back-stopped a 6-0 shutout against Liberty at home, but much more impressively, went the full 90 as UVA held on for a 2-1 win at Penn State.

D Lucy Parker, LSU – Three games, three shutouts for the LSU back line over the past week, picking up wins against Lamar, Stetson and Samford. Parker played every minute of all three matches, as LSU sits at 6-1 ahead of the start of conference play.

D Julia Leonard, Butler – The defender led a stifling effort at the back from the Bulldogs, which didn’t allow a shot on goal against Evansville and Northern Kentucky. Butler conceded just 10 shots across the two games.

M Sofia Jones, Santa Clara – It was a massive weekend for the Broncos, which held serve against both North Carolina and Notre Dame, winning both matchups at home. Jones played the full 90 in each match.

M Emma Welch, Alabama – A massive offensive output from Alabama saw the Crimson Tide score 10 goals in two games. Welch scored once, the game winning goal, and added a pair of assists as part of an impressive week.

M Emily Knous, Arizona – The creative force in the Arizona midfield, Knous excelled with two goals and an assist as Arizona beat Baylor by a 3-1 score at home. The freshman is off to a fine start to her collegiate career.

M Jyllissa Harris, South Carolina – It was a strong week for the freshman from New Jersey, who scored a goal and had an assist as the Gamecocks beat Wake Forest 2-0 last Thursday. She also found the back of the net in a 3-0 defeat of Coastal Carolina.

F Marlo Zoller, Oklahoma State – Another team that continues to roll at this point in the season, Zoller scored a goal in wins against California and San Francisco over the weekend.

F Catarina Macario, Stanford – The Brazilian star is being eased into action for the Cardinal while dealing with minor injuries. Macario was credited with three assists, though one a great Sophie Smith individual effort, as Stanford defeated Notre Dame and North Carolina.