Women's Team of the Week: September 21 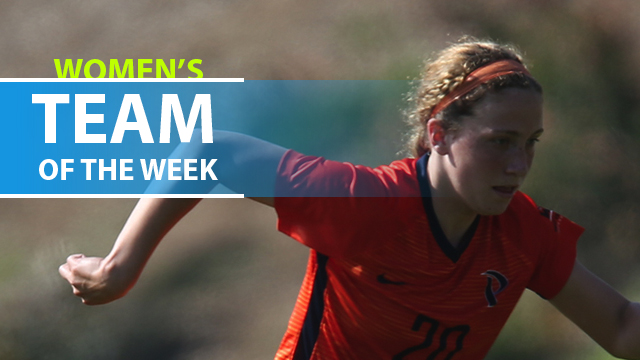 Two games in Texas, two wins for the Pepperdine Waves.

It was another great week for the West Coast Conference side, which hit the road for a pair of games against ranked opponents in the Lonestar State.

Thanks to two stout defensive efforts, Pepperdine returned to Malibu with two massive wins that will bolster their RPI. Both came in narrow margins, beating TCU by a 1-0 score on Thursday, and wrapping the trip up with a 1-0 win in College Station.

Helping provide those margins was the latest TDS Player of the Week, and second Pepperdine player to claim the honor in the fall 2021 season. Tori Waldeck scored the winning goal against TCU, and then assisted on Joelle Anderson’s winner against Texas A&M.

GK Brenna Crump, Pacific – Crump earned two more clean sheets over the weekend as Pacific picked up two more wins. The Tigers are now 8-1-1 after wins against Sacramento State and San Jose State; Crump picked up her fifth and sixth shutouts of the season.

D Brooke Golik, SMU – The defender played 90 minutes in two 1-0 wins against San Francisco and Oklahoma. Golik assisted on the game-winning goal against the Dons.

D Raegan Cox, Michigan State – An unbeaten start to the season continued on Sunday for the Spartans, as they edged Indiana by a 1-0 score to open Big Ten play. Cox played 90 minutes in defense to earn the clean sheet and win.

M Anna Haddock, Auburn – The sophomore’s stellar season continued, as she scored a pair of goals in Auburn’s SEC opener against Georgia.

M Lauren Teuschl, Penn – It’s going to be a doozy of a race in the Ivy League given what the teams have done out of conference. Teuschl helped Penn pick up a pair of wins, as she scored and assisted in a victory over Villanova. She also setup Jackie Bruder’s overtime game winner on Sunday in a 2-1 defeat of Rice.

M Parker Goins, Arkansas – Goins was involved in all three goals in Arkansas’ 3-1 SEC opener against Tennessee. She helped setup two of the goals with a pair of through balls, and scored the game’s second goal when a high, looping ball found the back of the net. She added a second goal on Sunday in a comfortable 3-0 non-conference win against UT Martin.

M Emily Mathews, Purdue – The Boilermakers captured their Big Ten opener thanks to a hat trick from Mathews, which helped secure a 3-1 win over Nebraska.

F Tori Waldeck, Pepperdine – After an outstanding debut season in the spring, Waldeck continues to excel in the fall. She’s now on three goals and five assists from Pepperdine’s nine games.