Women's Team of the Week: September 25 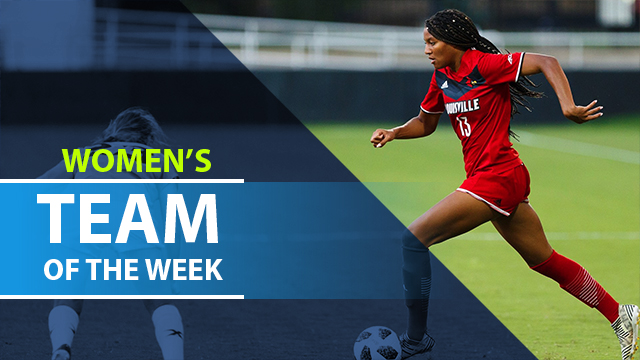 Something special is brewing in the ACC.

While the regular powers: Duke, North Carolina and Virginia are all off to strong starts, Boston College and Louisville are keeping pace to this point in the season.

The Cardinals picked up wins at home against Notre Dame and Syracuse over the past week, inspired in part by the contributions of the latest Player of the Week. Brooklynn Rivers netted the game-winning goals in both of those matches, ensuring that the Cardinals suffered no drop off.

Now winners of four straight, Louisville looks to keep it rolling this Saturday against North Carolina. See the other standouts from last week’s women’s Division I action below.

GK Hannah McShea, James Madison – Facing preseason favorites Hofstra, McShea and the Dukes spun another shutout, the team’s fourth in a row, winning 1-0 on Sunday. McShea made a total of five saves in wins over the Pride and Drexel, starting out CAA play with a 2-0 record.

D Baseley McClaskey, Navy – The junior defender had a huge role in Navy’s offensive output over the past week. She scored and had an assist last Monday in a 3-2 win against Howard, while setting up both goals in the 2-1 win against Loyola (MD).

D Mykiaa Minniss, Washington State – A strong start to her collegiate career continued, as Minniss played the full 90 as the Cougars kept the shutout on the road in a 1-0 win against UCLA.

D Kayla Duran, Boston College – Another first-year player excelling at the back, Duran went the full 90 minutes in wins over Syracuse and Florida State. The Eagles’ hot start to the season continued, with the win streak now at 10 in a row.

M Lais Araujo, Florida – In need of a big week to get the season on track, Araujo stepped to the fore. The Brazilian scored four times, including the game-winning goals, as the Gators defeated Kentucky and LSU.

M Samantha Jerabek, VCU – It was a breakout week for Jerabek, as the sophomore from Virginia scored four goals and added an assist as the Rams defeated St. Bonaventure and George Mason to open Atlantic 10 play.

M Chelsee Washington, Bowling Green – Washington had three goals and an assist as the Falcons opened MAC play with a pair of wins. Washington was directly involved in the scoring of four of BGSU’s five goals on the weekend, as she had a goal and an assist in a 2-0 win at Miami, then scored the first two goals in a 3-0 victory at Ball State.

F Raimee Sherle, Boise State – Sherle paved the way for Boise State to win at UNLV, as she scored a hat trick in a 3-0 victory on Sunday.

F Bunny Shaw, Tennessee – Bound for the Concacaf Championship soon where she’ll look to make an impact at the international level for Jamaica, Shaw scored the winners in a pair of wins last week. She tallied the opening goal as Tennessee topped Mississippi and Mississippi State.

F Brooklynn Rivers, Louisville – With her latest haul, Rivers is now second on the team with seven goals, including four game-winning tallies.

F Mimi Asom, Princeton – After going winless the week prior, the Tigers hit the ground running in Ivy League play with a 3-0 defeat of Yale. Asom led the way, hauling in a hat trick in the win.