Women's Team of The Week: September 27 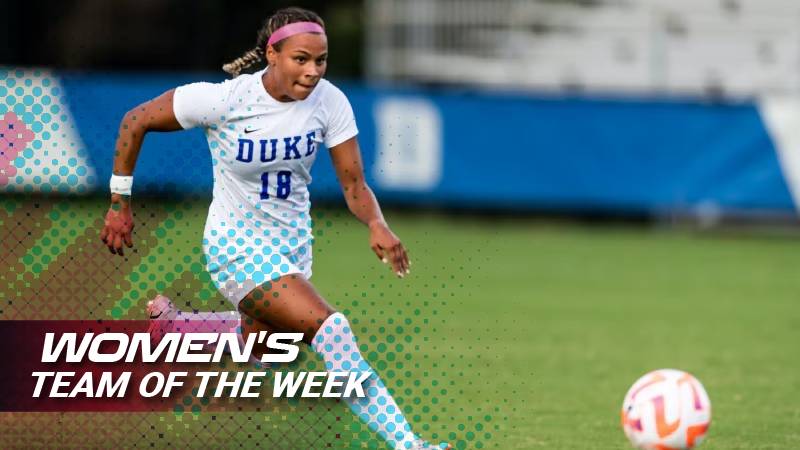 It only took 45 seconds for Michelle Cooper to put NC State away for good. Duke held a 2-0 lead at half time of its ACC clash and needed a third for security. And Cooper provided. The striker darted between two defenders to meet a Mackenzie Pluck cross, which she headed past a sprawling keeper. It was the third of her four goals last week, a deluge of quality to offset a week in which she failed to score.

She contributed elsewhere, tallying two assists as Duke beat two ACC opponents by a combined 9-0 scoreline. It was a dominant slate for the All-American talent, one worthy of player of the week honors.

D Leah Scarpelli, FGCU - Scarpelli did it both ways for the Eagles last week, tallying three goal contributions while also holding their opponents to just one goal.

D Madison Haugen, Georgia - The Bulldogs have enjoyed a strong run of late, and Haugen has been a key contributor. She posted two assists to help her team past Florida.

D Nicole Payne, USC - The strikers scored both goals of USC’s 2-1 win over Stanford. She also held the Cardinal to just one goal over 90 minutes.

M Felicia Knox, Alabama - Knox broke Alabam’s single season record for assists this week, tallying her 10th and 11th in a 3-0 win over Texas A&M. She was also important earlier in the week, providing another helper as Alabama beat Tennessee.

F Michelle Cooper, Duke - Cooper has moved out of an early season rut and found form. She led the Blue Devils with 4 goals and two assists last week.

F Trinity Byars, Texas - Byars scored twice as the Longhorns beat Texas Tech in Lubbock. She now has 10 goals in 10 games in a solid sophomore campaign.