Women's Team of the Week: September 28 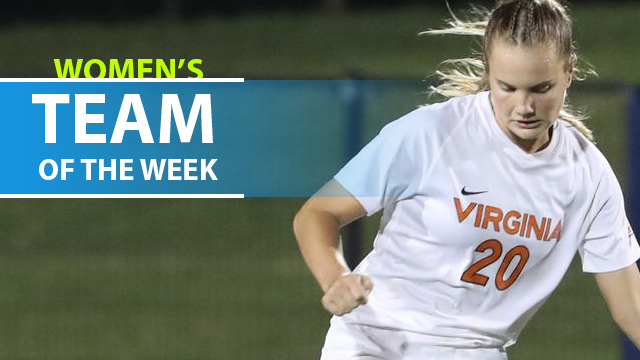 The ACC race is heating up as October nears.

Facing a couple of tricky opponents from North Carolina, Virginia found a way to secure all six points last week.

That included a 1-0 win last Thursday against Duke at Klockner, and a 2-1 victory on Sunday in Raleigh versus NC State. With the team’s attack still adjusting to the key loss of Rebecca Jarrett (who tore her ACL), someone like defender Natalia Staude is going to be huge in keeping things tight at the back.

Staude had a pair of excellent games last week to secure the latest Player of the Week nod. Staude played the full 90 minutes versus the Blue Devils, and then scored the winning goal on Sunday, a 2-1 header from a set piece.

GK Leah Freeman, Oregon – Six saves by Freeman and a strong defensive effort helped the Ducks come away with a 0-0 draw against UCLA.

D Natalia Staude, Virginia – The UVA attack isn’t quite firing in the same way during ACC play, making Staude a huge key for the team over the final stretch of the season. She was excellent against Duke and NC State.

D Ruby Diodati, Colgate – With two wins and two shutouts, Colgate has bounced back into the early Patriot League race. Diodati back-stopped those clean sheets against Boston U and Bucknell

D Aliya Diagne, Butler – The central defender led Butler to a pair of wins in conference play, as Butler beat Marquette and Seton Hall. She scored the lone goal in a 1-0 win against the Golden Eeagles.

M Hannah Bebar, Harvard – Finally playing college soccer, Bebar is a big part of Harvard’s early success. She bagged a pair of goals in a 3-0 win over Penn to open Ivy League play.

M Taylor Huff, Tennessee – It’s been a strong freshman season for Huff so far, which continued in SEC action last week. She scored a goal against Auburn, a 2-1 overtime victory. Huff also setup a goal against Missouri, also a 2-1 win.

M Jenna Nighswonger, Florida State – Capable of playing just about everywhere for the Seminoles, Nighswonger bagged a goal and assist in a 3-0 win against Louisville. She also had an assist in a 5-0 defeat of Pittsburgh.

F Croix Bethune, USC – Thanks to a goal and assist from Bethune, USC opened up the Pac-12 schedule with a 2-1 win against previously unbeaten Oregon State.

F Elyssa Nowowieski, Campbell – In a crucial Big South matchup on Sunday, Nowowieski scored a hat trick and had an assist in a 4-3 win over Radford. She also setup a goal in a 3-0 victory versus Presbyterian.

F Kirsten Davis, Texas Tech – After struggling last season, Davis has enjoyed a monster season and is back to her best in her final year. She had a huge pair of games in Big 12 play, scoring a hat trick against Oklahoma and adding a goal and assist versus Kansas State on Sunday.