Riding the momentum of an 11-game winning streak, #1 Florida State is right in the thick of its ACC schedule. Clemson comes to Tallahassee on Thursday night. While the Seminoles have rolled through ACC opposition, the Tigers have lost all five of its conference games, getting outscored 17-2.

Lurking not too far behind in the national rankings are the defending champions, #2 Stanford.Pac 12 action beckons this weekend, and two tough road games are on the immediate horizon for the Cardinal. Friday night sees the team make a stopover in Salt Lake City to take on Utah, before traveling to Boulder on Sunday and contending with Colorado. 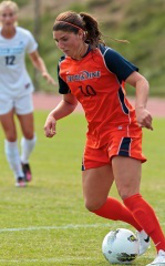 Stanford’s Pac 12 counterparts #3 UCLA is also on the road, traveling to the Pacific Northwest for matchups against Oregon and Oregon State, looking to keep pace with the Cardinal.

So far, Big Ten play hasn’t troubled #4 Penn State all that much, with five straights wins to open up its conference schedule. This weekend, conference action continues at home for the Nittany Lions, who are purring at a higher level with the return of Maya Hayes from U20 WNT World Cup action. Indiana pays a visit to State College as the two sides meet on Sunday afternoon.

Life in a new conference continues to be small worry for #5 Texas A&M despite tying last weekend on the road against Kentucky. SEC action continues at a fast and furious pace this coming weekend. Texas A&M welcomes Alabama and #20 Florida to College Station on Friday and Sunday respectively, looking to continue dominating the new opposition.

Road trips can always be the great equalizer in conference play, as teams cope with the burden of travel and playing two games in three days. And that’s what lies ahead this weekend for #11 Marquette, taking a trip to the Northeast for games against Providence and Connecticut. While those teams might not be near the contenders, the Golden Eagles need to prove themselves away from home as all other competitive programs wish to.

At this stage of the season, fewer matchups mean more than they do in the ACC. And this weekend’s matchup between two aspiring ACC powers in Wake Forest and Virginia has huge implications as the two teams chase a good seeding for the conference tournament. Having Katie Stengel back has been huge for the Demon Deacons, and they’ll look to keep the shackles on freshman sensation Makenzey Doniak, who leads the Cavaliers in goals and assists this season.

1. The great Navy winning streak is on the line in conference play, as the Midshipmen have won 13 games in a row and take on Patriot League foes Lafayette and Lehigh this weekend at home.

2. The Ivy League race is shaping up to be close as ever, as the eight teams chase that automatic conference spot. Princeton, Penn and Columbia are all tied with 2-0-0 records, and that is set to change this weekend. Penn hosts Columbia, while Princeton hosts Brown.

3. After recently making some noise on a two-game trip to the Northeast, Pepperdine finally gets to jump into West Coast Conference action. San Francisco is the destination this coming Sunday, as the Waves look to make an opening impression in conference play.