As October winds past its halfway point, the women’s college soccer season is running full steam ahead towards conference tournament season.

The regular season schedule is still in full swing, of course, as teams on the bubble of the NCAA Tournament go in search of vital wins to boost their resume.

Here’s a look ahead at the pivotal matchups this weekend: 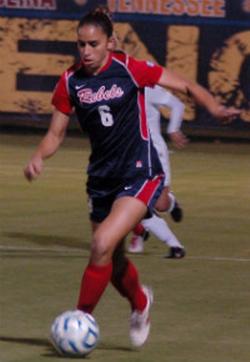 It’s a crucial encounter as the race for the SEC crown tightens – Florida trails by four points, while the Wildcats are just one behind current leaders LSU. This could be a high-scoring encounter as well as both sides enter with strong offenses: the Gators are lead by freshman Savannah Jordan, while the experienced and versatile Arin Gilliland powers Kentucky’s offense, alongside Stuart Pope and Zoe Swift.

Two teams neck-and-neck in the American Athletic regular season race, Rutgers hops on a plane for Orlando to contest a critical road contest against the Knights. Under new coach Tiffany Roberts Sahaydak, UCF hasn’t missed a beat, anchored by defensive stalwart Marissa Diggs and propelled in the attack by transfer Tatiana Coleman.

Rutgers should prove to be a handful for the Knights, coming into the matchup buoyed by Canadian international Janelle Filigno, and sparked by Stefanie Scholz and Madison Tiernan. Both sides need Louisville to drop points in order to challenge for a regular season crown, but will both look to snatch the full points.

Another big matchup in the SEC features the first place Tigers aiming to solidify their grip on the top spot – at least for now. To accomplish that against the Rebels, LSU must find a way to contain Ole Miss dynamic duo of Rafaelle Souza and Mandy McCalla. The pair has a combined 24 goals and 10 assists on the season. LSU has offensive weapons of their own, with freshmen Summer Clarke and Emma Fletcher enjoying strong starts to their season, while Fernanda Pina is an electric option on the wing.

Out west, it looks like UCLA is going to carry the day in the Pac-12. But neither California nor Colorado is too far behind, meaning that Friday’s matchup in Berkley is critical to their hopes. Buffalo forward Brie Hooks is returning to fitness, which is a needed boost, while Anne Stuller remains the focal point of the offense. The Golden Bears are coming off their first loss of the season against UCLA, and will look to return to their winning ways, leaning on attackers Ifeoma Onumonu and Kaitlyn Fitzpatrick.

The crucial ACC showdown is going to be the Cavaliers’ biggest test of the season, and it will come without the services of the best players on each team. UVA star midfielder Morgan Brian and UNC standout Crystal Dunn will both be with the U.S. Women’s National Team for a friendly against Australia the same day.

That could spell the end of Virginia’s perfect record, as the offensive encounter will hinge between UNC’s Kealia Ohai and Summer Green, while UVA can turn to Makenzy Doniak and Danielle Colaprico. Either way, while the stars will be missed it still should be a matchup to remember.

Can Nebraska hold on to its lead at the summit of the Big Ten? The Huskers are in pole position at the moment, but it’s just a two-point lead over Michigan and three over perennial champion Penn State. With two games on the road this weekend against Wisconsin and Minnesota, if Nebraska wants to finish on top they’ve got to find a way to secure six points in those two games.