Critical conference matchups begin this weekend, as ACC play kicks off across the Eastern seaboard.

And while a decent chunk of the premier games this weekend reside there, other big games are on the docket as well. Below is a look at five matches to watch.

Seeing Maryland in the Big Ten is still a new and somewhat weird experience, no matter the collegiate sport. And after an opening weekend win against Rutgers (another new Big Ten team) last week the Terps welcome the Michigan sides to town this weekend, starting with this matchup against the Wolverines. Jonathan Morgan’s side has a chance to make a statement to the rest of the conference if they were to pick up the full array of points. 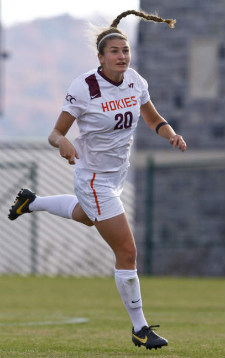 The Terps are flying under the radar a bit after opening the season with losses to UCLA and Pepperdine, two teams that are among the best in the country. Eight different players have found the back of the net, and goalkeeper Rachelle Beanlands has conceded only two goals in the last four games. Michigan travels on the road for the second time this season. The first trip to the west coast didn’t go so well. They lost twice in San Diego at the end of August and were outscored 8-0. Freshman goalkeeper Megan Hinz has seized control of the starting spot in goal, and they are fresh off the momentum of beating Wisconsin last weekend.

Is this the year Clemson takes a step forward in the ACC? The Tigers are unbeaten through eight non-conference games but face their most difficult test of the season with a trip to Blacksburg.

The Hokies have been a dominant force this season, outscoring opposition 36-3 so far in nine games, as 14 different players have notched a goal. Sophomore forward Murielle Tiernan’s seven strikes lead the way, but Shannon Mayrose and freshman forward Alani Johnson have also emerged as weapons. Clemson netminder Kailen Sheridan is sure to be busy in an attempt to keep the Tigers in the game, though the Tigers offense has been fairly strong this season behind outbursts from the likes of Tori Andreski and Catrina Atanda. It’s hard to see Clemson keeping up with the Hokies if this becomes a high-scoring affair, so they’ll aim to keep it close.

The ACC opener is big for both of these sides, as each continues to forge an identity in 2014. North Carolina’s attack has sputtered at times, as head coach Anson Dorrance tries to unlock the right combination in the final third. He certainly has plenty of weapons to call upon, including YNT stalwarts like Amber Munerlyn, Summer Green, Megan Buckingham and Emily Bruder.

Defensively, things have been pretty sound, with the team conceding just three goals in six games so far. It should be a tricky trip to South Bend for them, as the Irish have the same, if not more talent to send out on the field. Cari Roccaro, Morgan Andrews and Katie Naughton form a stout spine capable of dominating the center of the field, while Lauren Bohaboy has three goals on the season. Andrews star continues to shine as she leads the team with three goals and three assists, and she’ll look to make an impression against a UNC midfield that will look to press her and limit her time on the ball.

The loss of Casey Morrison and McKenzie Meehan could’ve spelled doom for the Eagles’ 2014 campaign. And while it is sure to sting now that the ACC schedule is here, BC’s strong start has certainly helped build momentum to this point in the season. Defense has been the key strength as well, conceding just one goal in its last six games before a Thursday night loss, while Haley Dowd and Stephanie McCaffrey have combined for 12 goals and eight assists so far. Can they shackle the Seminole attack? Both teams will enter Sunday’s encounter having played Friday night, so depth will be a factor, something that is sure to slightly favor FSU. Icelandic midfielder Dagny Brynjarsdottir has stepped up her goal-scoring game this season with six from five games so far, and is going to be the focus of the ever-improving BC defense.

Head coach Keidane McAlpine’s start at the helm of USC has featured seven games without a loss, including a win over Notre Dame in South Bend. The next biggest test comes this weekend against Pepperdine, which has quickly shot up most national polls thanks to a hot start of its own. A balanced offensive effort has helped the winning start, as six players have scored at least two goals or more, including Alex Quincey with five and Jamie Fink with four.

Only two shutouts over the first seven games have to be at least of some concern to McAlpine, whose team will need to be better at the back in order to shackle Lynn Williams. The senior, who has already come through in the clutch on more than one occasion for the Waves, has five goals on the year, three of which won games. Hannah Seabert’s strong play in goal has helped, as she’s conceded just five goals on the year and notched four shutouts.