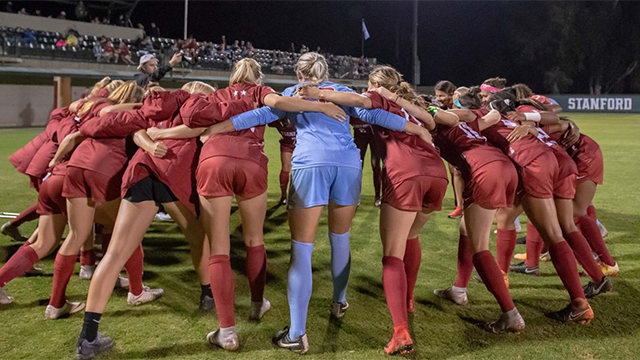 The Pac-12 season kicks off with a rematch of the 2017 national game. That and more in the top five matches to keep an eye on over the next few days.

At the start of the season, this looked like a marquee matchup on paper. But as the reality of the game approaches, UCLA is missing its two best players, the Cardinal missing its top talent, removing some of the allure of the match. Hailie Mace and Jessie Fleming are expected to be with the United States and Canada respectively, as the march towards World Cup qualifying continues. Without those two, UCLA has struggled by their own lofty expectations, losing last week against Washington State on home turf. Ashley Sanchez needs to have a big game going forward in order to beat Stanford. The key for the visitors in this one is to defend well; slowing down Catarina Macario and Sophie Smith is a must for the Bruins to at least pick up the draw.

While this game may not feature on any kind of broadcast, it’s a critical clash in the Big 12. Texas makes the trip up to Stillwater for a top-of-the-standings clash (albeit through just a pair of games for most teams). The Longhorns have been rolling, the only blemish on its schedule a draw with North Carolina in Chapel Hill. Cyera Hintzen and Katie Glenn have spearheaded the attack, combining for 12 goals and 10 assists between the two of them. The hosts count on their own dynamic duo, getting 11 combined goals from Marlo Zoller and Cyera Hintzen. Whichever side emerges as winners will get a leg up in the conference title race.

After a hiccup on the road against Stanford and Santa Clara, North Carolina has rattled off three straight wins to begin conference play. The Cardinals make the trip to the Triangle region for a chance to prove their status as ACC contenders, as Louisville’s started the season with three wins of their own. Freshman Maisie Whitsett’s eight goals and two assists have helped the team to a hot start, a nice compliment to Brooklynn Rivers. Breaking down a tough UNC defense is the key, as Lotte Wubben-Moy and Julia Ashley are experienced and talented at the back. The Tar Heels have enough going forward, and can call on bench pieces to have the advantage in this one.

Another Pac-12 side off to a hot start to the season, Colorado has scored 32 goals in the first 10 games of its season. The Buffaloes have a number of options, from Tatum Barton, Jorian Baucom and Taylor Kornieck, that can put the ball in the back of the net. Sunday’s game against the Wildcats finishes off a two-game swing to Arizona for Colorado, as they’ll face Arizona State on Thursday’s. The Sunday match with Arizona pits two Top 25 teams against one another, as a few freshmen have bolstered the Wildcats to a strong start. Emily Knous and Hallie Pearson are two of those, while Jada Talley possesses the kind of athleticism to get in behind a defense. Colorado has the advantage in this one, given the attacking pieces that they’ll bring to the Sun Devil state.

It’s rare for a team to check in twice, but Stanford welcomes the two-team duo from Southern California. A top-two clash in Palo Alto pits the Women of Troy against the reigning champions. USC has the weapons, whether at the back or up top, to give Stanford an extremely competitive game. Leah Pruitt’s overlooked as a senior, and freshman Penelope Hocking has chipped in five goals and four assists from the bench. If the USC offense clicks in this one, Stanford must be at the top of its game to pick up the win.