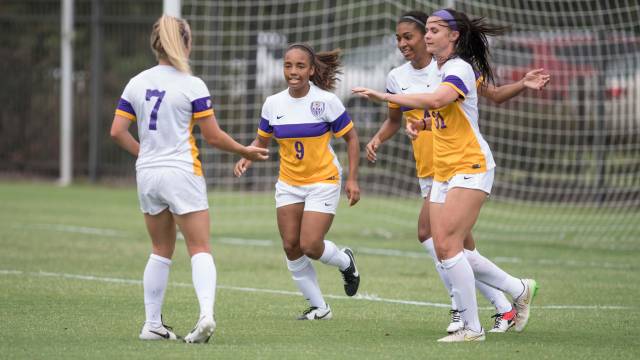 Canadian Olympians take the field against one another in Durham when the Mountaineers hit the road to face Duke. Rebecca Quinn battles against international teammates Ashley Lawrence and Kadeisha Buchanan in a meeting of potential College Cup squads. Duke’s been dominant during these early stretches of the season, conceding just 12 shots on goal through its first six games, and getting 16 goals from 11 different players. The numbers are backed up by a talented roster that has lived up to its billing ahead of what is their latest difficult test. West Virginia carries its unbeaten record into this encounter leaning on the defensive spine led by Buchanan, while Carla Portillo pulls the strings next to Lawrence and Michaela Abam in the final third. This one could go down either way – a shoot out between two potent attacks or a low scoring affair between two teams adept at controlling the game.

Back-to-back weekends of tough road trips will serve Minnesota extremely well once Big Ten play begins. This week’s venture to California sees the Gophers battle Stanford and Santa Clara. After going toe-to-toe with Duke last weekend, Friday’s clash with the Cardinal is another chance for the Big Ten side to stake a claim at being one of the nation’s elite programs in 2016. They’ll need a big game from Simone Kolander, as Stanford’s defense has conceded just two goals from its five games. The Cardinal are looking to continue their perfect and fine tune things in the middle of a nine-game home stand. Jordan DiBiasi has provided most of the scoring thrust with three goals thus far, though it’s more about Stanford’s ability to dominate games with Andi Sullivan and Tierna Davidson in midfield, and Maddie Bauer and Alana Cook along the back line.

The 2012 National Champions visit the 2013 champs, with both seeking early season statements. The Bruins have surged up the rankings, winning the first three of four games, including defeats of Texas A&M on the road and Penn State at home. Jessie Fleming has entered the lineup and been a revelation, injecting goals from the midfield, and providing a nice balance to a team that features athletic attackers like Darian Jenkins and Amber Munerlyn. There are the ingredients here for a high-scoring clash if the game opens up, as Megan Buckingham, Bridgette Andrzejewski and Zoe Redei have produced dangerous moments in the final third and will look to impose themselves on a UCLA back line that has looked sharp at times but also conceded four goals against Florida.

Traveling on the road to visit Georgetown marks Virginia’s toughest test of the season to date. There’s no doubt that the Cavaliers have impressed up until this point of the season, yet to concede a goal through seven games, while playing primarily at home. Vernoica Latsko and Alexis Shaffer have provided the majority of goal-scoring output, though nine others have also found the back of the net at one point or another. Rachel Corboz is the standout in midfield for the Hoyas, as she scored twice last weekend on the road against Rutgers. Grace Damaska and Crystal Thomas have also been in fine scoring form, and both will look to grab a goal on the Hilltop. Both teams like to try and possess the ball and impose their will on the game, so the result could end up being dictated by who wins the midfield battle.

The first major conference to dip its toes into league play is the SEC, which begins proceedings on Thursday night, following up with matches on Sunday as well. While there are several pivotal clashes, LSU opens up on the road in College Station on Sunday looking for it first marquee win of the season. The Tigers have the capability, behind the goal-scoring output of Jorian Baucom and Summer Clarke, to pull it off. The environment at Ellis Field could tilt the tables toward the host Aggies, which have actually lost twice at home already; although there is no shame losing to either Florida State or UCLA. Mikaela Harvey has reinforced her standing as one of the best players in college soccer while Haley Pounds and Emily Bates have been supplying the finishing touches up front. This one should evolve into a classic, high-scoring affair.

One of the many teams that have enjoyed a bright start to the season, Miami (FL) is off to a bright start with the ACC slate just around the corner. Backed by a strong effort by Phallon Tullis-Joyce in goal and timely scoring, the Hurricanes have won six of their first seven games. Two more non-conference games are left this week before beginning a tough conference schedule, with home games against Florida Gulf Coast (Thursday) and Florida International (Sunday). The non-conference schedule hasn’t been the most difficult, though pick up two wins in this four-day stretch, finish around .500 in ACC play and an at-large bid could be within reach.