The first weekend of women’s college soccer action featured few surprises, as the preseason favorites, for the most part, avoided significant upsets.

There’s another tantalizing slate of action on the docket for the coming weekend. That includes top 10 matchups, a U.S. Women’s National Team game with Mexico that renders a small handful of college players unavailable for the weekend, and another step in the long journey towards Cary, N.C. 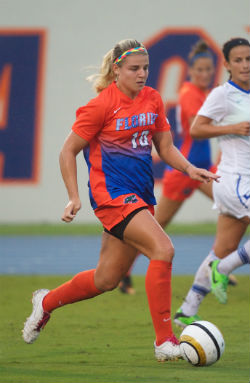 The Nittany Lions couldn’t come away with a pair of opening weekend victories, though there is little shame in drawing against a tough West Virginia squad. They’ll hit the road for the first time this season, and can send a message about national title credentials if they find a way to knock off a Cavaliers side that looked very good in two wins last week. Midfielder Morgan Brian will be available for Virgina(w) before making the short trip up to Washington, D.C. for Tuesday’s friendly against Mexico.

A matchup of two in state rivals, the opening weekend results for both sides increases the intrigue even more as the Seminoles prepare to visit the Gators in Gainesville. Florida freshman Savannah Jordan scored five of her team’s six goals, while on the other side, FSU’s defense looks just as good with Kassey Kallman and Kristin Grubka returning as center backs in from of goalkeeper Kelsey Wys, so that aspect of the meeting is something to keep an eye on. Redshirt freshman Berglind Thorvaldsdottir looks poised for a breakout year as well after leading the Seminoles offensively last weekend.

Two teams with top 25 aspirations – and neither really far away – square off down in Florida with the Volunteers looking to bounce back from an upset loss at the hands of Samford. But what makes this matchup all the more intriguing is the individual matchup between a pair of All Americans, as UCF center back Marissa will look to shutdown Tennessee’s New Zealand international Hannah Wilkinson.

With Santa Clara struggling mightily on its east coast trip last weekend, a West Coast Conference program has another chance to prove a point against a prominent non-conference opponent as Portland makes the trip to Northern California for a meeting with the Cardinal. Taylor Uhl got off the mark in her new surroundings, scoring a game-winning goal against Connecticut for Stanford, and can definitely be a difference maker for the California school. Freshmen Ellie Boon and Danica Evans both played prominent roles in the Pilots’ opening weekend wins, but the experienced of seniors Erin Dees and Ellen Parker will be critical for an upset to be secured.

Certainly the most prominent matchup of the weekend, both the Irish and Bruins cruised over their opening pair of games, each looking quite dangerous and dominant in all aspects of those wins. Now, the opportunity is ripe for both squads in this Sunday game to show how they stack up against top 5 teams. The Bruins are looking deep, with freshmen Gabbi Miranda and Darian Jenkins looking like nice compliments to established veterans Sarah Killion, Sam Mewis and Abby Dahlkemper. The Irish, so young last year, were also dominant as Lauren Bohaboy got on track with three goals, while Cari Roccaro, Mandy Laddish and Morgan Andrews bossed the midfield. The battle for the middle of the park, with Roccaro, Laddish and Andrews going up against Killion and Mewis, is likely to be the decisive factor in this one.

It was a strong start to the season for UCLA under new head coach Amanda Cromwell, with two shutout wins at home against opponents they should and did beat handily. The first road test for the Bruins comes this weekend, with a matchups against two ranked opponents; a stop by Marquette on Friday night before the aforementioned matchup against the Fighting Irish on Sunday.