Utley found Kate Schwindel at the edge of the visitors’ penalty area. Last season’s Big East Rookie of the Year turned and fired in her eighth shot of the game. A deflection redirected the ball beyond Western Carolina goalkeeper Katie Jacobs’ reach and into the net via the left post for the game winner. Finally, the Mountaineers had something to cheer after a spluttering start to the campaign. 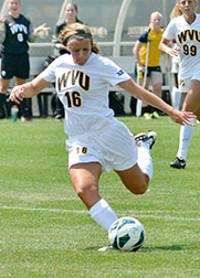 “We had some moments where Friday’s battle showed on Sunday,” said Izzo-Brown after Sunday’s victory. “But we moved the ball better, through midfield especially.”

Friday’s early signs were positive from a West Virginia team ranked #15 by Top Drawer Soccer going into the opening weekend. Senior Bry McCarthy took 78 seconds of the opening game to highlight why she’s been nominated to the Missouri Athletic Club’s (MAC) Hermann Trophy Watch List. The Canadian left-back intercepted a pass on the halfway line, bulldozed into La Salle’s penalty area and scorched a fierce drive into the roof of goalkeeper Gabrielle Pakhtigian’s net.

Then the wheels came off the Mountaineers’ wagon. They failed to register another shot on target, freshman Kelsie Maloney hobbled off with a hamstring injury following a tackle after she’d been flagged offside, and Mia Gunter – deputizing at right-back after a pre-season injury to Carly Black – found herself exposed by La Salle’s wing play. Experienced defenders McCarthy and Mallory Smith began to crack, and two crosses delivered two second-half goals for the visitors as they claimed a deserved 2-1 win.

“Our youth showed,” said Izzo-Brown of her starting line-up that featured four freshmen and two sophomores. “But our upperclassmen broke down too.”

Izzo-Brown spoke to her players about being patient in possession ahead of Sunday’s game, and emphasized using the midfield triangle of Amanda Hill, Jess Crowder and Bri Rodriguez as a conduit from defense to attack. They sprinted out of the blocks again against Western Carolina. Jacobs blocked Schwindel’s path to goal in the opening minutes, McCarthy raided forward to swell West Virginia’s offense, Smith’s height caused problems at corner kicks, and Jacobs thwarted Schwindel again from close range after Frances Silva’s cross-shot landed near the six-yard line.

The breakthrough arrived on 17 minutes when the Mountaineers put Izzo-Brown’s preaching into practice. Center-back Leah Emaus won a tackle on the edge of West Virginia’s penalty area and used Silva as an outlet. Crowder provided support and quickly pinged Silva’s layoff behind Western Carolina’s defense into Utley’s path. An unfortunate bounce allowed the visitors to recover, but Utley still managed to work an opening and drill her left-foot shot beyond Jacobs from 16 yards.

A feature of Izzo-Brown’s 4-3-3 system is that her three forwards are constantly switching, making crossover runs to escape their markers. Schwindel and Silva combined three times in the opening 10 minutes of the second half, yet neither player could extend West Virginia’s advantage. A sense of déjà-vu enveloped Dick Dlesk Stadium on 69 minutes when another defensive breakdown involving Smith gifted an equalizer to Western Carolina forward Markie-Lynn Studnicky.

“It was definitely frustrating again, but we knew what we had to do,” said Schwindel after Sunday’s game. “We weren’t going to let that feeling from Friday come back.”

The Livingston, N.J. native continued her personal crusade with another couple of shots before setting up Silva with an exquisite deep cross that left Jacobs scrambling across her line. Silva, arriving beyond the far post with a tight angle to aim at, planted her header agonizingly back across the face of goal.

McCarthy’s dallying allowed Laura Greb to steal the ball on the edge of West Virginia’s penalty area as the back line again faltered. Greb’s cutback found Amanda Schwartz standing unmarked, but the freshman midfielder blazed her shot narrowly over Sara Keane’s crossbar from eight yards. Luck had turned in the Mountaineers’ favor, and Schwindel’s deflected effort on 83 minutes finally rewarded an offense that outshot their opponents by 24-6.

“You ask your forwards to create chances and to finish chances, and we did both,” Izzo-Brown said. “We still have some breakdowns we’ve got to figure out. The good news is I know we can correct them.”

Any remediating actions from this week’s practices will be sternly examined Sunday when West Virginia meets reigning NCAA champion Stanford at the Penn State Invitational tournament.

“We have nothing to lose going into that game,” Schwindel said. “We’ve just got to come out and show them who we are as a team and that we can compete.”