While size may not matter in soccer (depending on who you ask, at least), Riley Collins has it in spades. The versatile player stands at 6-foot-3, 190 lbs, and can slot in just about anywhere on the field for Baltimore Celtic SC. 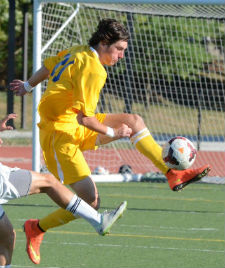 “I felt like having the opportunity to play under this prominent coaching staff, and alongside a very talented group of players would be most beneficial for me in trying to pursue a goal of playing professionally. Being able to play for a school that I have grown up around is honoring and I had a great pride in saying I would be able to do so.”

Part of Collins’ college search revolved around finding a program that has accomplished things on the field, something UMBC has done in recent seasons.

“It is a well-established Top 25 program that has made a number of NCAA tournament appearances the last few years and have also won their conference,” Collins said. “I was also very intrigued in the close knitted family feel of the team and the relationships that the coaching staff had with the players. Playing close to home around my family and friends was just an addition to the decision.”

Collins is the third verbal commitment to UMBC’s 2015 recruiting class.

When it came to making his college decision, Noah Paravicini, a creative, attacking midfielder for Marin FC and Marin Academy in California, simply subtracted the soccer element from consideration.

It still led him to the same school.

“I decided to commit to Dartmouth because it is a place that I would love to attend even if I weren't playing soccer,” Paravicini told TopDrawerSoccer.com. “The combination of a successful program and a great education was very enticing.”

Dartmouth is a consistent top-half finisher in the Ivy League, a fact that didn’t escape Paravicini’s notice.

“The soccer program was very appealing to me, as Dartmouth has been one of the most successful Ivy’s in the last decade,” he said. “The coaches are of a very high caliber and there is a ton of quality on the roster, and the team tests itself every year against some of the strongest programs in the country.”

Of course, the icing on the cake was the caliber of education Paravicini can pursue once he steps on campus in the fall of 2015.

“The school itself is a fantastic institution,” he said. “It holds a very high academic standard in every field, and the heavy focus on undergrads is what separates it from others of its kind. In addition, Hanover is a great college town in a beautiful setting."

Goalkeeper Max Lurie (PDA) committed to Dartmouth for the class of 2015.

Goalkeeper Andrew Romig (Richmond United) committed to North Carolina for the class of 2015.