As a player I describe myself as a foward who is determined to score and to be dangerous around the box, I also like being a playmaker.

If there’s one thing clear about its recent recruiting approach, UMBC makes it a priority to snap up as much local talent as they can. 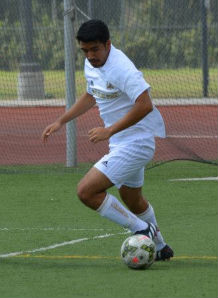 Add another local kid to the 2016 class after receiving a verbal commitment of Tre Pulliam, a standout forward from Baltimore Celtic SC.

“I decided to choose UMBC because it means a lot to play at one of the top college in your hometown,” Pulliam told TopDrawerSoccer.com. “Also because I trust the coaches and the players that are there to get me to the next level and they play at a really high level while offering a very good education.”

Head coach Pete Caringi and the rest of the coaching staff made a massive splash last fall with a run to the College Cup, and have fostered a friendly, tight-knit environment that lured Pulliam.

“I really like how UMBC players bond on and off the field and how they look after each other,” he said.

Pulliam is the third verbal commitment for UMBC in 2016.

For Eduardo Sanchez, found a slew of reasons to make UC Riverside his college destination.

“One is that any time I'm at the campus it feels right for me, it is an environment that I'm comfortable with having grown up near it,” he told TopDrawerSoccer.com. “I was easily able to visualize it as my home for the next four years. Two is that it is an amazing school that will provide me with an excellent education in whatever it is that I choose to study. Three would be that the soccer program seemed absolutely amazing to me, it seemed a perfect fit for the type of player that I am.”

Considering a number of different schools around California, Sanchez emphasized how well he saw himself fitting into the soccer team as the driver of his pick.

“I really like the style of play that they carry within their program,” he said. “It is a style that I know and am comfortable working with, I think I can be successful there. Also the training sessions I've watched are great and I know they will help me become a better player every single day.”

The beautiful campus in Riverside was also a big plus, and Sanchez felt excited about the opportunities and variety of academic options.

Six players are set to join UC Riverside this fall.

Currently in the midst of a gap year attending Community College and playing with Seattle’s U18 Academy side, Gomez is slated to head south and kick off his college career in the fall.

“I chose CSU Bakersfield because I have so much family in Los Angeles and I think it's important to have a support system nearby in such a drastic life transition,” he told TopDrawerSoccer.com. “They have a great program, they play a style that I can fit into easily, and they have a growing program with the new coaching staff they got last year. I really like the coaches as well.”

Bakersfield offered the right majors that Gomez was looking for, and the Southern California lifestyle held an appeal to him.

He also seemed very comfortable in the direction the soccer team is heading.

“I liked the ideas the coaches had about where they wanted to take the program,” Gomez said. “I also liked the fast style of play they have.”