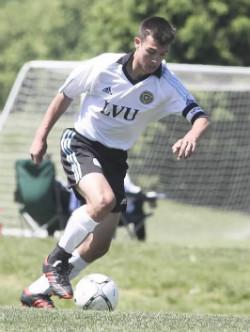 During a visit to the school, it didn’t take too long for Jack Natale to realize how much he liked Bucknell.

“I knew right away that Bucknell was the perfect place for me,” he told TopDrawerSoccer.com. “My high school soccer team did a team camp there and immediately I could tell it was exactly the right fit both academically and for soccer. I fell in love with it. The campus was beautiful, the coaches, players and facility were fantastic and I felt right at home.”

Adding to that desire was the way head coach Brendan Nash runs his program, as Natale thought it would be quite easy to eventually make the transition into the team.

“Coach Nash's approach to the game is also a good fit. I think that I will fit into the program well because the style of play is similar to my club team Lehigh Valley United,” he said. “As a central defender, I learned that it is important to maintain possession of the ball and develop play from the back.  We are one of the top clubs in the country and my coach Greg Ramos has instilled in his players a strong commitment to success both on and off the field.”

There was an important academic element to the choice as well, as the school had the major Natale was looking for.

“In addition, I plan to major in Mechanical Engineering and Bucknell has an excellent program,” he said. “Originally, I thought I would be going to another school much farther away but after being at Bucknell, which is only a little over two hours from my hometown of New Hope, PA, I realized that I would be much happier with the school's location and playing in the Patriot League.”

During his college search, Samuel Wancowicz did his research, making three visits to the Penn campus before finally making the decision to commit there.

“I decided to commit to Penn because it offered the very best combination of academics and athletics,” he told TopDrawerSoccer.com. “Coach [Rudy] Fuller, coach [Robert] Irvine, and coach [Pete] Pososki really made me feel at home when I visited the campus and I definitely like the school, facilities and direction the soccer program is going in.”

While the Quakers may have struggled last season, Wancowicz is opmistic that things are looking up in Philadelphia.

“The soccer program really excites me because it is one on the rise, the facilities are top notch and I feel like coach Fuller is doing all the right things to place the Penn soccer program perennially in the top 25 argument,” he said. “I’m going there because I think we are building to be a national contender.”

Joining Wancowicz in the class of 2014 is Luka Martinovic, another defender from New York. He echoed a lot of the things he liked about Penn that his future teammate observed.

"I decided to commit to UPenn because of two reasons,” Martinovic said. “One was that academically it was a perfect fit for me. The support system that some of the guys on the team have described is amazing. I felt that in the environment UPenn provides I could be just as successful off the field as I would be on it. Two, because of the strong soccer tradition that it has. Coach Fuller has led the team to two Ivy league championships, and three NCAA Tournament Appearances.

“Coach Irvine and coach Pososki were amazing throughout the entire recruiting process, and were also part of the deciding factor for me because of the support and how they made me feel about their program and UPenn. With that experience and companionship, and with a very strong recruiting class that was brought in for the 2013 graduating class I can't see the future being anything but positive, and I wanted to be a part of it."

Along with the coaching staff, the school itself certainly made an impact on the future Quaker.

"UPenn is beautiful,” he said. “I was the first to think that being in Philadelphia meant there was no campus, and it was all incorporated into the city. That's just not the case. UPenn has a perfect balance of city and campus life, which really attracted me as a student-athlete. The education is on a whole different level as well. Being an ivy league school UPenn can offer me a lot of opportunities that would be hard to come by elsewhere."

Midfielder Garrett Muzikowski (Toms River SA) committed to American for the class of 2014.

Goalkeeper Craig Duggan (Vardar) committed to South Carolina for the class of 2014.

Midfielder Christopher Scian (Soccer Domain FC) committed to Northeastern for the class of 2014.

Forward Zachary Wright (Sporting KC) committed to North Carolina for the class of 2014.