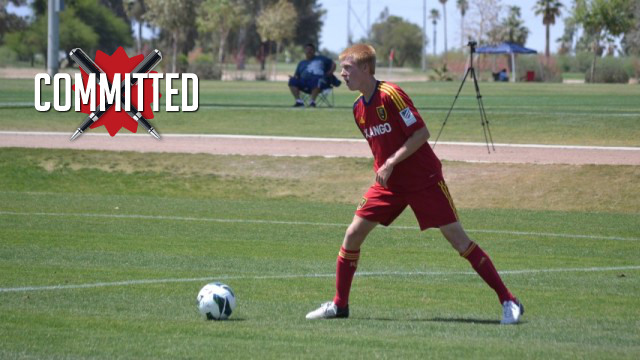 A national champion, internationally experienced competitor and stout center back, the commitment of Justen Glad is a huge addition for Stanford’s class of 2015. 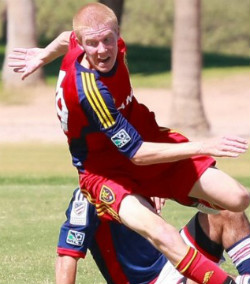 There was plenty that fueled Glad’s commitment to the Pac-12 power.

“It’s obviously a very good school and I really like the campus,” he told grandesportsacademy.com. “My former teammate Trevor Hyman is in his first year there and my current teammate Corey Baird is also committed there for next season.”

Along with Hyman entering the team’s ranks this season, next year’s squad will also add Glad’s current teammate at Grande Sports Academy Corey Baird, who is committed to for the class of 2014.

Few players in his class can match Glad’s accolades. He played last season on Real Salt Lake’s Grande Sports Academy U16 squad, parlaying that into a call-up to the U17 MNT Residency program in Bradenton, Fla. for the spring. He made the 2013 U17 CONCACAF Championship squad that failed to secure qualification, and also traveled abroad to tournaments in Azerbaijan and Japan.

He also enjoyed a taste of success by helping his RSL U16 team capture the title at this summer’s Finals Week. He hopes to continue that winning tradition at his next stop in Palo Alto.

“I want to be on a successful college team and I think Stanford will provide that,” he said. “Hopefully we can contend for a national championship.”

A center back with good skills on the ball and ability to win challenges in the air, Timmy Mehl is excited for the challenge ahead after making his commitment to Indiana.

The defender was able to catch the eye of the IU coaches earlier this year at one of the most prestigious youth tournaments in North America.

“The coaching staff at Indiana saw my team play at Dallas Cup and expressed interest in me as a player,” Mehl told TopDrawerSoccer.com. “When I did my unofficial visit, I was impressed with the campus and facilities.  I immediately clicked with Coach Yeagley and Coach Maisonneuve.

It didn’t take much else to convince Mehl, as the university met his desire and academic requirements. The soccer program itself, meanwhile, doesn’t need much to convince any recruit.

It was a banner campaign for Cornell in 2012, and while the current season is still young, the success of last year continues to attract recruits interested in Ivy League competition.

Bailey Bloxsome found plenty to like about the soccer program and university.

“I decided to commit to Cornell because I really liked the training environment and the coaching philosophy,” Bloxsome told TopDrawerSoccer.com “Coach Zawislan has created a very successful program and I believe my playing style will fit well into the system. The team atmosphere and high-powered offense is very attractive and I hope to work hard and contribute as much as possible.

“On the academic side, I have always taken school very seriously and savor the opportunity to attend such a prestigious university, where I can continue to push myself on and off the pitch.”

Midfielder Rashid Alarape (Georgia United) committed to Georgia State for the class of 2014.

Defender Jacob Slomski (Oakwood SC) committed to Hartford for the class of 2014.

Midfielder Elijah Lockaby (Orlando City) committed to VCU for the class of 2014.

Defender Trey Pujats (Andromeda SC) committed to Air Force for the class of 2014.