A player who leans on her technical ability and tactical acumen to excel on the soccer field, an America East program recently landed the verbal commitment of Top 150 recruit Christina Cannella. 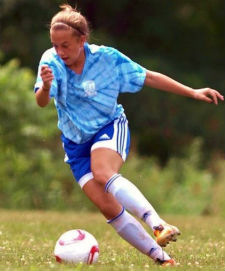 “U of Hartford really had the whole package,” she told TopDrawerSoccer.com. “Their style of play: a game of possession rather than a high and direct style [appealed to me]. Additionally, it was close to home and just the right size.”

Cannella, whose best position on the field is in a No. 10/attacking midfield spot, strongly emphasized the importance on how the possession style influenced her commitment.

“Coach John Natale spoke my language when it came to the style of play and the team plays that game,” she said. “It is beautiful to watch when it all comes together.”

The attacker is the first reported verbal commitment to Hartford’s 2016 recruiting class.

A hard-working midfielder who has played at the same soccer club since she was seven years old, Annamarie Arino’s commitment to Murray State started with the school’s coaching staff.

“Head coach Jeremy Groves, and assistant coaches Matt Lodge and Vanessa Phillips-Bosshart are just fantastic people,” Arino told TopDrawerSoccer.com. “They really made me feel me comfortable when I visited. They’ve done great things with the program in their first year.”

It was more than just the coaches, of course, as Arino did a thorough research of what Murray State offered her both on the field and in the classroom.

“I also got a chance to spend time with the players and that really sealed the deal for me,” she said. “Plus the school is a perfect fit for me. You really feel like you are part of a close-knit community or family. They have three outstanding programs that I can major in that support my career goals of becoming a physical therapist.”

Groves and his staff assumed control of Murray State last year, and Arino liked their ambition and desire to build a winner.

“They expect to win and they schedule a tough out of conference schedule with the expectation that we will compete against the top schools in the country in the NCAA tournament,” Arino said. “They stress position specific training and even the strength and conditioning is very individualized.”

Arino is the second verbal commitment to Murray State for 2017.

Passion and hard work are cornerstones of Madison Navarro’s game.

The Eclipse midfielder ended up picking a Division III school not to far from home after committing to the University of Chicago, which fulfilled the criteria she wanted in a school.

“I didn't want to go too far from home [and] I wanted a school that has a high academic reputation as well as quality athletics,” Navarro told TopDrawerSoccer.com. “There are so many other things like internship opportunities, study abroad opportunities and the campus is just so beautiful so I chose it because it checked all the right boxes and had the perfect balance of soccer and academics.”

Striking similarities between Navarro’s club team and the soccer program factored in significantly to her commitment.

“They keep the ball on the ground, have a possession, quick passing style of play,” she said. “They have a group of competitive, talented and driven young ladies who come together to make a very tight knit family that I can't wait to be a part of. I can tell the girls have great chemistry both on and off the field and being a family is very important to both the players and the coaches. They also have been very successful and I can't wait to contribute to that success this fall.”