A dominant target forward from Ohio, Abby McNamara is set to join ACC program Wake Forest in the next couple years.

A lot of her decision came down to the impressive, all-around package the school had to offer. 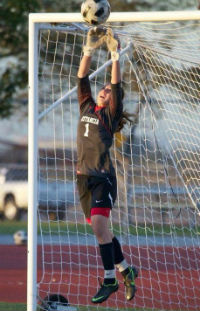 “I decided to commit to Wake Forest because I loved the campus the first time I stepped onto it,” McNamara told TopDrawerSoccer.com. “Academically they are a great school and they have such a prestigious well-known soccer program. They have an awesome coaching staff and I know that coach Tony [da Luz] and coach Jason [Lowe] will push me to become the best soccer player I can be. I also wanted to play in the best conference in the country. This will allow me to continually challenge myself and compete with and against the best players in the country.”

Wake Forest adds a goal scorer who scored 31 goals in 23 games at the U15 age group in the 2013-14 ECNL campaign, and has seven through her first six games in the current slate.

Along with the chance to compete in the ACC, the coaching staff’s warm reception and approach to the game were huge factors in McNamara’s choice.

“I love their philosophy and team atmosphere they create with their players,” she said. “I also really like the skilled possession type of game they play with an emphasis on attacking. I just felt like it was the perfect fit for me. During my visit I also spent some time with some of the freshmen players and they were great and made me feel sincerely welcomed. I am excited to have them as teammates when I get there.”

During the course of her college search, McNamara learned that she was looking for a school the size of Wake Forest.

“It’s not too big and everyone is very active and involved in the Wake community,” she said. “I was impressed with how welcoming all the people I met on campus were to me. It just felt like the perfect atmosphere to be in. I’m so blessed and thankful to have the opportunity to play soccer and get an education at such a phenomenal university.”

Two players are verbally committed to join Wake Forest in 2017.

A player from the southeast, a Big South program emerged as the right fit for McClaine Logsdon during her college search.

“When I visited Coastal Carolina, everyone I met was very inviting,” she told TopDrawerSoccer.com. “The players where very personable and coach [Paul] Hogan and coach [Carrie] Patterson were very enthusiastic and determined.”

As far as the soccer program was concerned, along with the coaching staff, she liked its overall attitude.

“The coaches are very approachable and have great relationships with their players, but still know what it takes to be the best soccer program possible,” Logsdon said. “I also liked the girls who are currently in the program, and their drive to get better every day.”

Logsdon is the second verbal commitment to Coastal Carolina for 2016.

One of six Signing Day additions to Alabama State, the SWAC power had offered everything Gianna Guyot was searching for in a school.

“During my initial visit to the campus, I immediately felt like this is where I was meant to be,” she told TopDrawerSoccer.com. “The school offers the majors I am currently considering and a Division I sports program, creating the perfect combination of academic challenge and athletic competitiveness I was looking for in a school. In addition, I think it is important to have experiences outside of your current community. Seeing the world from a different view point is just one more way to grow.”

With options all over the country, a program with a tight-knit team was a big part of what she liked about the school.

“The family atmosphere of the team was the biggest draw for me,” Guyot said. “Also, being a goalkeeper, I will be following in the footsteps of Kylee Hathaway who had great success both on the field and in the classroom. I like that the bar has been set high. It motivates me to be the best that I can for both me and the team.”