Avery Batson’s college search focused on a school that would provide both a great education and a strong soccer program. 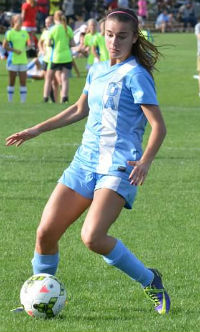 It should come as no surprise that she ended up at one of the Ivy League’s best soccer teams.

“Harvard is one of the best schools in the world and students who obtain a degree from such a renowned university can prosper in the future,” Batson told TopDrawerSoccer.com. “The soccer program is also one of the best in the Ivy League and they regularly compete in the NCAA tournament. Coach Ray [Leone] and coach Mike [Calise] have done great things for the program and I know they can help me continue to develop into the player I aspire to become.”

The GSA defender searched through a number of top universities throughout the country, but eventually felt at home at Harvard. That, coupled with the soccer team’s interest in adding a player in her position, helped her decision-making process.

“Playing outside back, I felt like many schools were looking for key attacking players, such as midfielders or forwards,” Batson said. “However, when I visited Harvard, coach Ray and coach Mike stressed the importance of a left outside back. Being a natural lefty, I would have the opportunity to play on the left side and be a part of the attack. They gave me a sense of encouragement to use my position to the best of its abilities and make an important change in the game.”

Even moving north wasn’t a deterrent, as Batson took a quick liking to the Boston region.

“I loved the city of Boston and the feel of the school and, surprisingly, the cold weather,” she said. “The area is absolutely breathtaking and the architecture is astounding. Furthermore, Harvard encourages its students to not only obtain a degree, but to also expand their knowledge. For example, I love theater and drama, but I also love biology and psychology. At Harvard, I have the opportunity to explore many subjects and take pride in its wonderful education.”

She’s the second verbal commitment to Harvard for 2016.

Since a trip to compete in the Surf Cup when she was just nine years old, Jessica Haidet has been firm in her desire to play soccer in Southern California one day.

Several years later, the Georgia defender is set to fulfill her dream after committing to play at USC in 2017.

"Attending the University of Southern California will be an honor and playing soccer there will be a dream come true,” Haidet told TopDrawerSoccer.com. “I met so many great coaches in California but I could not ignore the connection I felt with coaches [Keidane] McAlpine, [Jason] Lockhart and [Jen] Klein.”

Haidet did her homework when it came to playing soccer in California, completing eight unofficial visits and playing in camps at school in the state.

The connection with the coaching staff played a big role in her final decision, as she knew assistant coach Jason Lockhart who coached her during her early years playing ODP.

“Once I visited the USC campus, I felt a connection there too,” Haidet said. “To go to college and play soccer in Los Angeles, California for a Pac-12 school and be a part of the Trojan family is incredible.”

The defender will finish high school playing for the Pace Academy Knights and her lifetime club team, Tophat 17 Gold, in Atlanta, Georgia and will join the Trojans for the 2017 season. She’s the second verbal commitment for that class.

A club known for churning out top Division I talent, Gabrielle Bair is heading to Bucknell after making her college commitment.

“I felt an instant connection with the staff and players on my first visit to Bucknell,” she told TopDrawerSoccer.com. “The campus size and student-professor ratio really appealed to me.”

Bair’s college search was fixated on schools in the Northeast (with a couple of exceptions), and it was Bucknell’s coaching staff that nudged the school in their favor.

“Coach [Ben] Landis and coach [Leah] Sipe have made me feel comfortable and welcome from my first visit, and their style of play is compatible to mine,” she said. “I also loved the soccer stadium and athletic facilities.”

Bair is the second verbal commitment to Bucknell for 2016.

Midfielder Hannah Torbett (FC Alliance) committed to UT Chattanooga for the class of 2016.

Midfielder Jillian Jamero (Mustang SC) committed to Air Force for the class of 2016.

Forward Tori Gann (Birmingham United SA) committed to Alabama for the class of 2015.

Goalkeeper Emma Grace Goldman (Tennessee SC) committed to LSU for the class of 2016.

Goalkeeper Amanda Dennis (Slammers FC) committed to Penn State for the class of 2016.

Midfielder Sevilla Cole (Albion Hurricanes) committed to Houston for the class of 2015.

Defender Madeleine Gallagher (Albion Hurricanes) committed to Trinity (Texas) for the class of 2015.