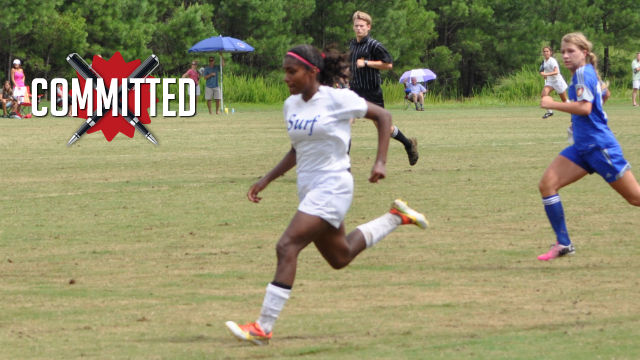 Since her arrival on U.S. shores at the start of 2012, Brazilian forward Catarina Macario has been an unstoppable goal-scoring machine for San Diego Surf in the ECNL.

During the 2013-14 season, she bagged 42 goals including playoff games, as the Surf snagged the U15 National Championship in Richmond, Virginia this past summer. The No. 1 ranked recruit in the class of 2017, she recently verbally committed to Pac-12 program California.

A main factor in the decision was the coaching staff, as her old club coach Chris Lemay is now associate head coach with the Golden Bears.

“He was my first coach in the U.S.,” Macario told TopDrawerSoccer.com. “Chris was the coach that most contributed to my evolution as an athlete. No other coach knows me as well. In my opinion, he is one of the best coaches in the country. I believe that Chris Lemay and the head coach Neil McGuire will prepare me to be a more complete player to face the challenge of professional soccer after college.”

The academic element was important as well to Macario, all the more reason for her to choose Cal.

“UC Berkeley is one of the best universities in the world and I will have the honor to study in a school known worldwide,” she explained.

The soccer program, while not currently at the prestigious heights of Pac-12 rivals UCLA and Stanford, is on an upward trend under head coach Neil McGuire. Their 2014 recruiting class was ranked at No. 5, and their current crop of verbally committed players is full of top players for future classes.

“I am sure that in two or three years, Cal will be a superpower in college soccer and I will give everything for that to happen,” Macario said. “I believe in this because they already recruited some of the best players in this country such as Ana Gil, Chloe Frisch, Hillary Beall, Luca Deza, Kayla Fong, Julie Doyle, Kailee Gifford and many others.”

Macario possesses a blend of speed, technical ability and astute finishing ability in front of goal, and she has big plans. While not yet a U.S. citizen, she hopes to play for the USWNT one day in a World Cup or Olympics, as she is working towards getting a U.S. passport down the road.

A creative player able to operate with the ball at her feet, the challenge of NC State was enough for Tziarra King to commit to the ACC program.

“I decided to commit because I can see myself being successful at NC State both academically and athletically.”

Head coach Tim Santoro was the driving force behind her decision, along with the Raleigh campus and its surroundings.

“I really enjoyed the coaching staff and the players, I loved that I felt welcomed,” King said. “I loved the campus and the many modernized buildings and resources. Also, everyone was so nice and welcoming, it felt like one big Wolfpack family.”

King is the third commitment to NC State for the class of 2016.

A driven player always looking to get better in goal, Brooke Littman didn’t need much convincing that South Bend, Indiana and Notre Dame was the right place for her.

“My commitment to Notre Dame was truly a dream come true,” she told TopDrawerSoccer.com. “To have an opportunity to play for one of the most prestigious and successful programs in the history of women’s Division I college soccer is an incredible honor. To not only work hard to uphold the soccer traditions built at this amazing school but to get an amazing academic experience too and all in an environment where I know my values are shared by my fellow classmates/teammates is extraordinary.”

Littman found that the program matched her work ethic and trying to improve every day.

“The rich history and traditions of hard work and unrelenting determination to be the best are what I liked most about the soccer program,” she said. “I also loved the camaraderie the girls have with so much support for each other on and off the field. To know that I would also have the chance to work with Theresa, Diego and most especially Dawn Siergirj, I was so excited. Dawn is like the goalkeeper whisperer."

She is Notre Dame’s second verbal commitment for the class of 2016.

Forward Julie Doyle (San Diego Surf) committed to California for the class of 2017.

Defender Sophie Taylor (Lonestar SC) committed to Auburn for the class of 2016.