For Walters Leigh Haynes, the road to Winston Salem has been one filled with long hours in the car. 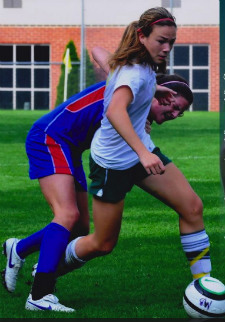 The Alabama native would travel to train with the Concorde Fire in the ECNL, before a family issues triggered a switch to the more local Birmingham United side. She eventually did enough to catch the eye of head coach Tony da Luz and his program.

“Wake Forest fit both my soccer and academic aspirations,” Haynes told TopDrawerSoccer.com. “I have always been a fan of the Demon Deacons women’s soccer program at Wake Forest. Wake Forest has a very strong soccer program, and I know I will be challenged everyday.  I attended two soccer ID Camps there last year, and knew that is where I wanted to attend school. Last week during an unofficial visit, I got to spend time with the coaching staff and the team and they were all very welcoming.  Coach da Luz is very passionate about his program, and holds a high bar for his players not only on the field but also off the field in their studies.”

Haynes had plenty of good things to say about the school’s soccer team.

“I loved everything about Wake Forest’s soccer program,” she said. “Coach da Luz and his staff run a very disciplined and proactive program. I love how intense and technical the training is under Coach da Luz. I like how Wake Forest provides all their athletes with resources that will ensure that you will succeed in the classroom.”

The Alabama native also liked the opportunities she knows will be there for her in the classroom, as she thinks of her future beyond soccer.

“Wake Forest ranks as one of the best schools in the country,” Haynes said. “Even though I am undecided on my major, I really liked how they have so many different options in what to major in. I also love the feeling I get when I am on campus. Everyone on campus was so nice and welcoming!  I know that Wake Forest will provide me the platform to achieve all my academic goals.”

Forward Clara Gastaldi (Concorde Fire) committed to Georgia for the class of 2015.

Defender Cecily Hartman (Concorde Fire) committed to Alabama for the class of 2015.

Defender Hayley Hubbard (Challenge SC) committed to Houston for the class of 2015.

Midfielder Natalie Ward (Slammers FC) committed to Notre Dame for the class of 2015.

Midfielder Leah Mohammadi (Slammers FC) committed to Harvard for the class of 2015.