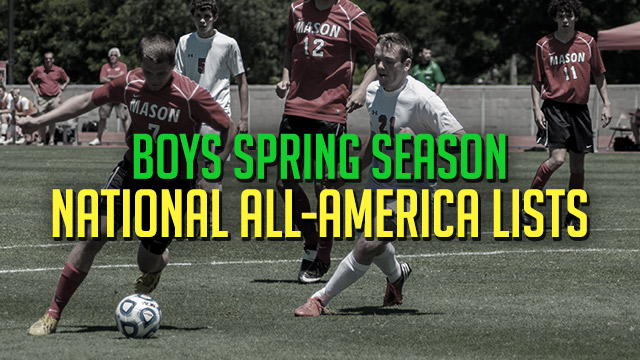 In a season where Bottari, a native of Italy, scored more than 30 goals, it will be his final strike that will be long remembered. The Clemson signee netted the lone goal in the Class 4A state final, giving J.L. mann a 1-0 win over Wando in a battle of state and spring national powers. Bottari returned to high school soccer in 2015 after sitting out the 2013 and 2014 seasons to focus on club play. Bottari was named the state's Mr. Soccer, captain of the Super XXII, Gatorade state player of the year and now, the TopDrawerSoccer.com Spring Player of the Year.

The former Development Academy player delivered 25 goals and had 12 assists, earning him The Washington Post Player of the Year honors. He also was named Group 5 state player of the year.

Mann scored 19 goals and added 15 assists, leadin Cosby to a 20-2 season and a state semifinal appearance. He was named the Virginia Group 6 and Rchmond Post-Dispatch Player of the Year.

McLaughlin, the Gatorade state player of the year, finished with 30 goals and 14 assists for the Class 4A state runner-up squad. He and his brother have committed to Southern Methodist University.

Burnikel was named Class A state player of the year after leading St. Jsoeph's to a fourth straight state title. He will next join his brother on the Clemson roster, starting this fall.

Conwell led MBA to its first state title, scoring the game-winner in the state semifinals and one goal in a 3-0 state final victory. The senior ended his season with 14 goals and 10 assists.

Bain was named Mr. Soccer for Utah after helping Alta to a state title and a 19-1-1 season. Bain had eight goals and 13 assists in a balanced attack that included five of his teammates on the 15-member Class 5A all-state squad. Bain will attend and play for BYU, which competes in the PDL as a club team.

Raranje was named the Tulsa World Player of the Year. The Tulsa signee scored 11 goals and had 21 assists. He scored the goal that pushed the state final into OT, which Jenks ultimately lost to Norman North 2-1.

Crutchfield has been an anchored for Snohomish, which has rolled off back-to-back state titles. Generally a midfielder, he spent more time defending this season. He finished with four goals and 11 assists. He was named the Class 4A MVP by the state coaches and he earned a spot on the Seattle Times all-star squad.

Emerson was part of a strong 1-2 defensive punch that lead MBA to a state title. Emerson and fellow back Davis Luster were key in a defense that alklowed only three goals during the regular season. Emerson committed early to Stanford.

Masten was the All-Lowcountry Player of the Year in 2014, and he turned in another strong performance in 2015 as Wando reached the state final. Usually a defender, Mastern scored six goals in the playoffs. Masten anchored a defense that allowed 16 goals during a 25-2 season.

Lapsley played every minute in goal for Lakeside School this season, posting 13 shutouts. He had a goals against average of 0.45 while helping the program to a state quarterfinal appearance. Lapsley was a Settle Times first-team honoree and picked up the Gatorade state player of the year honor, as well.

After serving as assistant coach for 11 years, Spinello took over as George Mason's head coach in 2011 and has elevated the program's status. George Mason has won three straight state titles and is riding a national best 43-match win streak. George Mason outscored its opponents 160-3 while rolling to the Group 2 state title.

Spring Player of the Year