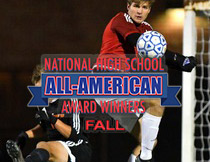 The TeamSnap Fall All-America teams are compiled by TopDrawerSoccer with consultation with coaches and media members from around the country. Players from all 34 fall-playing soccer states are eligible for consideration.

The Stanford commit is the No. 10-ranked prospect in the Class of 2019 IMG Academy 150. Bouda scored a staggering 49 goals to lead Millbrook School to a NEPSAC C runner-up finish. The native of Ghana has scored 79 goals in 33 matches during the past two high school seasons.

The Georgetown commit is the No. 34 prospect in the Class of 2018 IMG Academy 150. Kiley was named Ohio's Mr. Soccer after scoring 24 goals and dishing out 11 assists. He guided Dublin Coffman to the program's first-ever state semifinal appearance. Dublin Coffman was 66-11-8 with him in the lineup, which included a 19-2-2 showing in 2017.

Wittenbrink was the West Co-MVP at the High School All-American Game, where he scored two goals. The Indiana signee had 39 goals and 18 assists while leading Libertyville to a 20-1-2 season and a state runner-up finish. Wittenbrink was named Pioneer Press All-Area Boys Soccer Player of the Year and first-team all-state by the coaches and ChicagolandSoccer.com.

Chalbaud was only in the U.S. a few months before committing to North Carolina, which took notice of this senior talent. Chaldbaud was considered the top all-around player in a strong New Jersey Prep A class, which includes two other All-America honorees and teammates who are committed to UCLA and Akron. He had 12 goals and nine assists in 17 matches and led St. Benedict's to a 19-0 season, the program's 28th state title in the last 29 seasons and a FAB 50 No. 1 final ranking.

The Connecticut signee is the No. 88 prospect in the Class of 2018 IMG Academy 150. Diop is a repeat TeamSnap All-America honoree who had 25 goals and 15 assists while helping Pennington School to a Prep A state semifinal appearance in 2017. The Senegal native finished his two-year high school career with 59 goals. Diop was a two-time Trenton Times Player of the Year.

The Notre Dame signee was the East MVP at the High School All-American Game. Omar, a team captain, had 13 goals and 15 assists to lead Berkshire to a 17-1 season and a NEPSAC Prep A runner-up finish.

The Virginia commit is the No. 12-ranked prospect in the Class of 2019 IMG Academy 150. Originally from Canada, the speedy Shaffelburg shook off an injury to finish the season with 16 goals and 12 assists while leading the team to a NEPSAC A runner-up finish. This is Shaffelburg's second appearance on the TeamSnap All-America list.

Blynn emerged as one of the nation's top outside backs, and he committed to St. John's following a strong showing at the High School All-American Game. The team captain, Blynn had three goals and six assists from his defensive position, leading South Kent School to a NEPSAC B runner-up finish.

The Maryland signee is a four-time Baltimore Sun All-Metro selection, the last three years on the first team in an area loaded with college-bound talent. He had eight goals and 11 assists during his senior season. During his four years at Archbishop Curley, the team twice reached the MIAA A final and at least advanced the semifinals all four years.

The Dartmouth signee has been part of the Bermuda Men's Under-20 National Team. This past season, Simons anchored a defense that helped Berkshire to a 17-1 season and a NEPSAC A runner-up finish. During his four-year high school career, he was part of two NEPSAC A championship teams (2014 and 2016).

The Yale signee was the West Co-MVP at the High School All-American Game. He played a key role in Whitefish Bay's 25-0 season and FAB 50 No. 2 final ranking. The two-time conference player of the year and all-state selection had a 0.40 goals against average, and he recorded 35 shutouts during his career.

Richard experienced a fairy-tale ending to his 40-year high school soccer coaching career. Brooks School trailed 2-0 in the NEPSAC B final to favored South Kent School before the team rallied for three goals in 19 minutes for a 3-2 victory. The win capped an undefeated season and earned Brooks School a first-ever Prep Top 10 national title. The longtime math teacher was a former professional soccer player in the 1970s before ending up at Brooks School in 1978 to start his coaching career, the past 36 years as head coach.

PLAYER OF THE YEAR: Ryan Wittenbrink