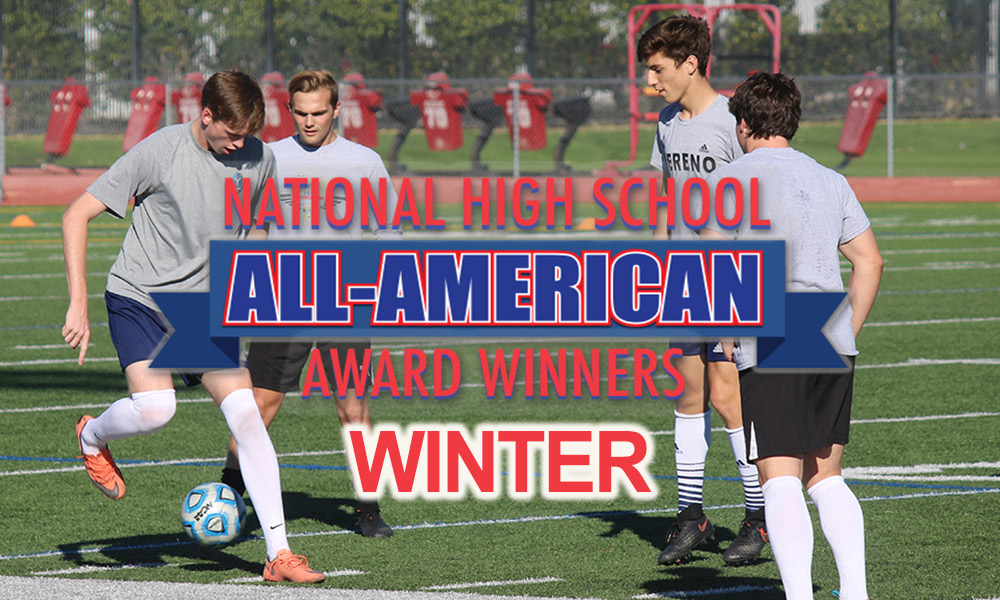 The TeamSnap Winter All-America teams are compiled by TopDrawerSoccer with consultation with coaches and media members from around the country. Players from all seven winter-playing soccer states are eligible for consideration.

The 6-foot-3, 185-pound UC Santa Barbara signee had 39 goals and 13 assists while earning the AZPreps State Player of the Year honor. Clemmensen led Brophy to a 21-1-2 season, losing only in the state final. Brophy won titles at the Arizona Showcase and North Texas Elite Showcase and Clemmensen netted nine goals and converted a penalty kick in those two tournaments. He scored 75 goals over the past two seasons.

The UC Santa Barbara commit experienced incredible highs and lows on the field this past season. He scored a school-record 25 goals, leading all CIF Southern Section Division 2 players. But before the team's final match the then nationally ranked team had to forfeit 10 games due to a violation by another player on the team, a move that cost the team a playoff berth. The day after learning the team's fate, Dolezal led the team to a season-ending victory, scoring in the process.

Ortiz has won back-to-back District 4-6A MVP honors, a mighty fete for a high school sophomore. Ortiz had a 35-goal season as a freshman and found a way to top that in 2018, going for 42 goals. He was a Dallas Morning News and Fort Worth Telegram All-Area first-team selection for the second straight year.

The California signee was the Marin Independent Journal Player of the Year. He was regarded by many coaches as the top player in NorCal this year. He led Marin Academy in goals and assists -- 18 goals, eight assists. Jung helped Marin Academy to a North Coast Section Division 4 title and a NorCal regional quarterfinal appearance.

The SMU signee was the Dallas Morning News after helping Coppell back to the Texas 6A state semifinals. Priest had 28 goals and 12 assists as a senior. He was a three-year starter at Coppell, a perennial state title contender.

The Portland signee and former US Soccer Residency member led San Clemente to a CIF Southern Section Division 1 semifinal appearance and a CIF Southern Regional runner-up finish. On a team that had several standout players, Weber was the organizing figure and he delivered 15 goals and 22 assists for the nationally ranked team.

The Pittsburgh signee was a three-year starter at center back for national power Montverde Academy. During his 57 varsity matches, Montverde conceded only 28 goals.

The offensive-minded center back played a key role in Servite winning a fifth straight Trinity League title. He scored 15 goals -- most of them on set pieces -- and added five assists. He helped Servite to the Lotto Sport Western Showcase title and a second-place finish at the Nike SoCal High School Classic. He made both all-tournament teams.

The Western Texas(m) signee anchored Elsik's defense as the team went 25-0-2 and won the Texas 6A state title. He had four goals and nine assists. His fourth goal of the season was the game-winner that gave Elsik a 1-0 victory over San Antonio Reagan in the state final.

The SMU signee was named the Louisiana Division I Defensive Player of the Year after leading Jesuit to a state title in a classic victory over fellow state power St. Paul's Lanson delivered four shutouts in five playoff games and finished the season with 26 shutouts.

For the better part of the past six years, Elsik has been a state title contender -- but this year the team delivered. Cox, who was a college track standout who competed in the 1996 Olympic Trials and later had tryouts with two MLS clubs, guided Elsik to a 25-0-2 season. Cox has a 198-36-25 record, 86-8-5 over the past four seasons.

PLAYER OF THE YEAR: Carter Clemmensen