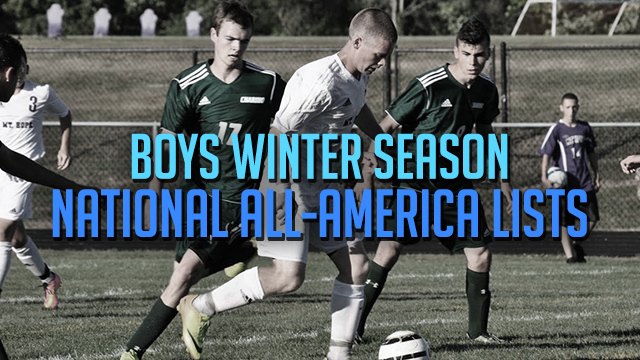 The four-year starter wrapped up his high school career with a 25-goal senior season. DaSilva helped American Heritage to a 15-3-3 record. He was selected to the All-Broward County first team by the Miami Herald and Sun Sentinel.

Langlois was named the Florida Dairy Farmers Mr. Soccer Player of the Year for 2015. He scored 66 goals and added 25 assists, pushing his career totals to 13 goals and 74 assists.

The Arizona Republic Big School Player of the Year had a goal or assist in 19 of Sandra Day O'Connor's 20 matches last season. The junior finished the season with 16 goals and seven assists.

Shinyashiki had a knack for netting the key goals. The senior standout scored more than 20 goals while helping Montverde Academy to a 21-0 season and stretching the program's undefeated run to 117 matches. He was at his best in the Montverde Academy Soccer Tournament, where he netted five goals in three matches, including the winner in the championship contest, to earn MVP honors. In club soccer, he won the Golden Boot at the 2013 Gothia Cup while playing for his native Pequeninos do Jockey team.

Suarez was selected as the All-Sun Player of the Year. He scored 44 goals to lead Fontana to a 22-2-2 season. He turned down two offers to play in Mexico and, instead, signed with Dock Sud in Argentina.

Cook is one of two standout holding mids on this year's All-America team. He was named the CIF Southern Section Division I Player of the Year, the Trinity League co-MVP and the Orange County Register Player of the Year. The Saint Louis signee had two goals and seven assists.

Martinez was named the RGVSports Player of the Year after leading Brownsville Rivera to a 28-0 season and a Class 6A state title. The attacking midfielder, who was a four-year varsity starter, ended with 23 goals. He scored the first goal in the team's 2-0 state final win over Cinco Ranch.

Silva, a holding midfielder, was a dominant force on the nation's undisputed No. 1 team. After the school year, Silva signed with MLS and was claimed by the San Jose Earthquakes, who have made the 18-year-old their youngest roster member ever.

While many of Montverde Academy's past teams have been driven by offense, this one was simply amazing on defense. Newton, a Memphis signee, anchored a defense that allowed only three goals en route to the team's 21-0 season.

Waitman, who played more of an outside back position and was able to move into the offensive end, was another key component to Montverde's defense, which allowed only three goals in 21 matches. Waitman and Newton had the benefit of playing in front of MVA's three keepers -- two signed with NCAA Division I programs and the other with an NCAA Division II squad.

Caulfield, despite postseason injuries, was named the Tampa Times first-team. He helped East Lake to the regional semifinals.

Garcia, in his 18th season as head coach, guided Rivera to a 28-0 season, the Class 6A state title and a No. 2 final ranking in the SIMA FAB 50. Garcia spent six years as an assistant at Rivera prior to becoming head coach, and the team has qualified for the playoffs 23 of those 24 seasons. He has a head coaching record of 365-101-49.

Winter Player of the Year