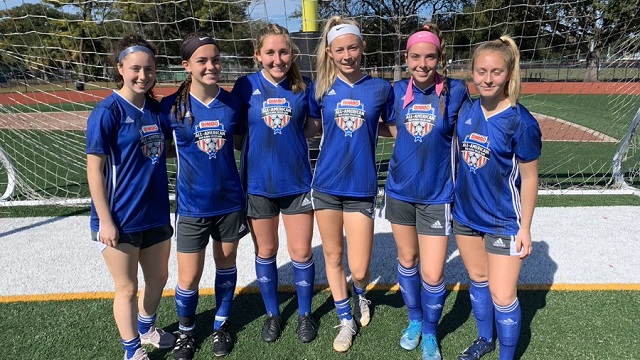 WINTER PARK, Fla. -- The High School All-American girls soccer game saw fireworks late in the match as the East posted a 3-1 victory. The East led 1-0 with only 15 minutes left before two quick strikes made it 3-0.

In naming this year's Best XI, we went with two goalkeepers because they both were outstanding.

Match video is embedded below.

F: Catherine Barry, Tabor Academy (Mass.), South Carolina: One of the nation's top prospects showed why among a cast of all-stars. She runs with pace, can strike the ball with either foot and was a threat to score every time she touched the ball. As one coach put it, "She has all the tools." Barry scoerd the second goal and was right in the mix for the team's third goal, as well.

F: Kacey Lawrence, Masuk (Conn.), Michigan: She was dangerous with the ball at her feet. Lawrence served up an assist that clinched the East victory.

F: Sydney Ham, Briarcrest Christian (Tenn.), Mississippi: Coaches said she was one of the best players on the field. She created a lot of opportunities, but was unfortunate that none resulted in a goal.

M: Anna Haddock, Greenwood (Ky.), Auburn: Haddock was one of two West midfield standouts. The coaches praised her ability to keep it simple and stay effective.

M: Brianna Jablonowski, St. Anthony's (N.Y.), Virginia: Jablonowski was a dominating force in the midfield during the first half. She was a box-to-box player.

M: Nedya Sawan, Mountainside (Ore.), Portland: Sawan demonstrated a level of toughness unmatched on this day. She usually imposed her will on defenders. She showed a strong shot and simply doesn't want to lose a 1v1 chance. She was in the running for West MVP.

D: Sara Brocious, Eastern (N.J.), Rutgers: The East MVP was all over the place, shutting down the West attack. She reads the game very well.

D: Peyton McNamara, Brien McMahon (Conn.), Ohio State: McNamara is a midfielder by trade, but on this day moved back to defender and helped the East lock down the West attack.

GK: Stephanie Sparkowski, East Meadow (N.Y.), Michigan: Sparkowski earned her 45-minute shutout, making several key saves. In addition, she played all the angles well. The coaching staff said Sparkowski has a calming presence on the field and really helped organize the back and control the match.