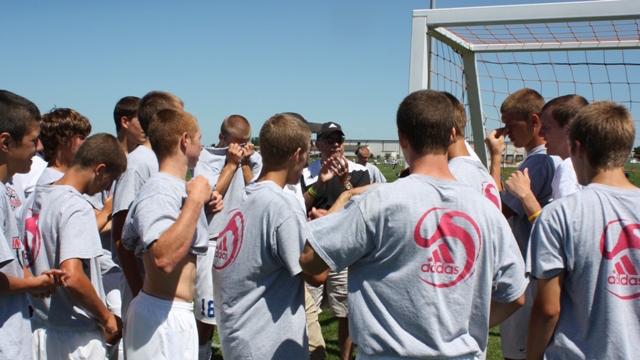 When it comes to high school-aged soccer, all is not lost — at least not yet.

Two significant high school team-based summer showcases and a newcomer on the scene are cautiously moving forward, according to event directors.

All three events — the Adidas Summer Soccer Showcase, adidas National Soccer Showcase and Kansas City High School Showcase — are hoping to provide a soccer outlet, especially for those who lost their spring high school seasons due to the coronavirus shutdowns. While a weekend of matches won’t make up for months of lost experiences, these competitions could provide one last chance for fellowship and competition — assuming they are allowed to proceed. Of course, that remains a major question mark.

Here is a look at those summer events: For more than a decade, the Adidas Summer Soccer Showcase, held in Burlington, Iowa, and run by Eric Stratman, has been the Midwest benchmark event for high school teams that are allowed to participate in the summer. More than 40 high school teams are confirmed for the upcoming events, representing Illinois, Kansas, Missouri and Oklahoma.

Stratman confirmed Sunday that although the Spring Showcase was canceled due to the coronavirus precautions, the June 12-14 and June 19-21 Summer Showcase events are still on. If those events are postponed, they will be moved to July 10-11 and July 17-18, respectively.

Class of 2020 high school seniors who did not get the chance to play during the spring season will be allowed to participate in the Adidas Summer Soccer Showcase this year.

The adidas National Soccer Showcase, in Strongsville, Ohio, is billed as is an annual event designed to bring high school boys and girls teams from across the United States together to play a series of games for player identification, team development, and program comparison.

While considered a national event, it is almost exclusively programs from Ohio. But unlike the Adidas Summer Soccer Showcase, the adidas National Soccer Showcase has a blend of high school and club teams. The event is held at Ehrnfelt Soccer Complex with some satellite fields in Strongsville and nearby Medina.

Tobey Cook, the boys director, confirmed Sunday that both events are on as scheduled right now, and "of course this is contingent on the decisions made by government entities relative to the health and safety of all involved."

The newcomer in this year’s summer high school circuit is the Kansas City High School Showcase.

The event was planned pre-Covid-19 but has taken on greater meaning since as both Kansas and Missouri canceled their spring high school girls seasons before they even started.

The KC High School Showcase, which plans for boys and girls divisions, is scheduled for July 16-18 and will be contested at Wyandotte Sporting Fields in Kansas City, Kan.

Chris Lawson, director of the event, said the event is on as planned and participation could be enhanced by recent actions taken by the Missouri State High School Activities Association. The state’s governing body, pending permission by local, state and national health authorities, have relaxed two key guidelines regarding summer activities. First, the MSHSAA voted to make the summertime dead period and the summer limits on contact optional for the summer of 2020 only, opening the door for team competition. In addition, the MSHSAA Board of Directors voted to allow seniors to be viewed as enrolled students through the summer, which allows them to represent their high schools in summertime interscholastic competition.

Programs interested in participating in such team summer events should receive clearance through their governing bodies as guidelines vary from state-to-state regarding summer participation.