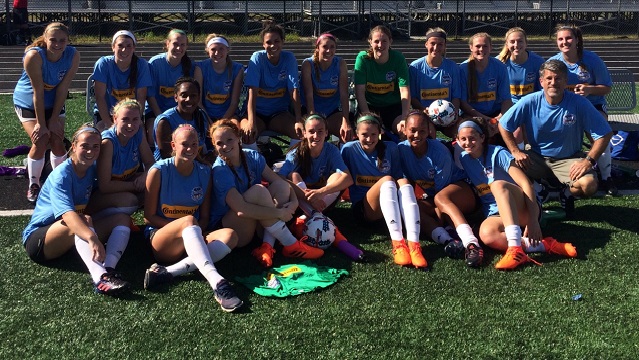 CELEBRATION, Fla. -- In recruiting circles, this was a special senior class in Indiana.

On Saturday, in Florida, a collection of those Indiana girls made that statement loud and clear to a national audience.

Katherine Soderstrom of Carmel (Ind.), Cassidy Lindley of Guerin Catholic (Ind.) and Kristina Lynch of Penn (Ind.) combined for four goals and four assists as the West rolled to a 6-1 victory over the East in the annual High School All-American Game, which was played at La Rosa Field at Celebration High School.

Florida commit Lindley finished with two goals and three assists and was named West MVP. Florida State commit Lynch had a goal and one assist. And Butler commit Soderstrom got it all started with a scrappy put back in the 13th minute.

The trio are club teammates, as well.

"I was nervous today," Lindley said after the match. "I wanted to come here and make an impact and I think I did -- I think we all did."

An early shot by Lindley was parried away but found the foot Soderstrom, who finished into the open net for a 1-0 lead in the 13th minute.

"We were playing well at the time, but had nothing to show for it," Soderstrom said. "It was a scrappy goal, we needed it and it helped us."

Although Virginia Tech commit Molly Feighan from Arlington (N.Y.) tied it on a header nine minutes later, Lindley returned the game to the West's favor with her first goal, a strike from 20 yards out, with five minutes left in the first half.

After the break, Lynch, Lindley, Sophia Braun of Portland Jesuit (Ore.) and Lauren Rakytiak of Strongsville (Ohio) added goals to turn it into a one-sided affair.

For Lindley, the performance was a crowning moment for a player who has battled through two surgeries and limited playing time since August of 2016.

Lindley had hip surgery on Aug. 2, 2016, and it took nearly seven months to recover. Not long after returning, she had the same issue in her left hip, which also required surgery in May 4, 2017.

"I was so upset, there was nothing I wanted more than to represent ny school in my senior year, especially after missing my junior year," Lindley said. "All summer I was in PT -- five days a week. I was back running in seven in a half weeks. I made it back and played Aug. 28. I eased myself back in, 10 minutes a half to start, and increased from there."

Lindley ended up leading Guerin Catholic to a state runner-up finish to Penn in a battle of FAB 50 Top 10 teams. Penn, with Lynch, finished No. 1. Portland Jesuit, with Braun, was No. 2. In fact, all of the goals in the girls match were scored by teams that finished in the FAB 50 Top 30.