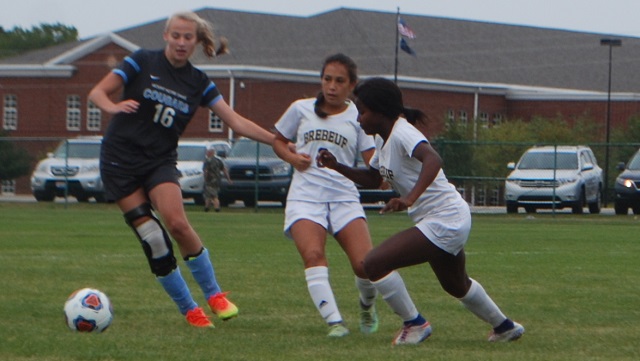 ZIONSVILLE, Ind. – And the Day 1 winner goes to Cincinnati.

The Lady Eagle Invitational brings out surprise results every year – usually with some region or state stepping up its game.

Katherine Camper, Brunswick (Ohio), Sr., MF: Camper controlled the midfield and kept the team on an even keel, which help the team make a late rally and nearly pull off a late draw.

Reni Osuntokun, Brebeuf Jesuit (Ind.), Sr., GK: Osuntokun was not put under much pressure, but that was often thanks to her ability to read the game. Several times, just when it appeared Mount Notre Dame (Ohio) had sprung a forward, Osuntokun raced off her line to collect the ball at the top of the box before it became a scoring chance for the opponents.

Hallie Pearson, Brebeuf Jesuit (Ind.), Sr., MF: Pearson, an Arizona commit, was the best player on the field and assisted both goals in the team’s 2-0 win. One assist was in the run of play, springing a teammate for an easy goal. Her other assist came from a set piece. Pearson covers a lot of ground, both side to side, and moving forward in the attack and able to recover for defensive plays.

Ariella Pitty, Brunswick (Ohio), Jr., MF/F: Pitty, an Ohio State commit, netted the goal for Brunswick in a 2-1 loss. She was constantly around the attack as Brunswick put Indianapolis Cathedral (Ind.) under a lot of pressure late in the match.

Lexi Watson, Mount Notre Dame (Ohio), So., D: MND went with a young lineup that acquitted itself quite well in a 2-0 setback to nationally ranked Brebeuf Jesuit. Watson was moved to center back and helped organize the back.