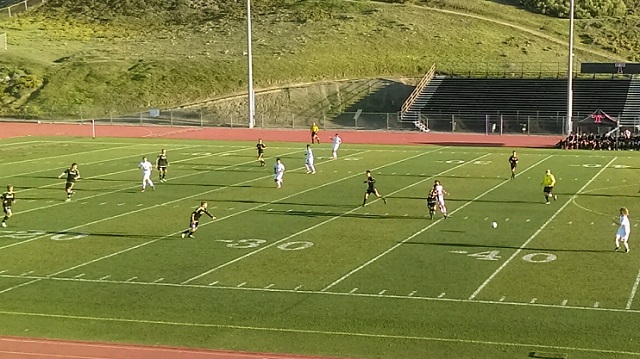 Never mind that it was just the first round of the Lotto Sport Western Showcase on Thursday at Thalassa Stadium. This was a defining win for a youthful, yet talented Brophy Prep team and its first-year head coach Paul Allen.

"That's a fantastic team," Allen said, referencing Loyola. "For us to beat them, stay in the mix (for the championship) and get to play (in the semifinals) is huge."

Brophy took the lead on a first-half goal by Karl Bercy, and Loyola tied the match in the second half on a goal by Aidan Cuevas.

In the shootout, Loyola had two shots hit the post and one sail over the crossbar as Brophy emerged with a 3-2 victory. Sam Fletcher, Brandon Theodorou and Carter Clemmensen converted for Brophy.

Corona del Sol (Ariz.) 2, Cathedral 1 (PKs): In the sudden death round, Cathedral's final attempt sailed over the bar to allow Corona del Sol to advance with a 6-5 PK win following a 1-1 match. Cathedral’s pace and pressure bothered Corona del Sol in the first half as the Phantoms built a 1-0 lead on a goal by Sal Ortega. In the second half, Corona del Sol found its form, played direct and in the closing minutes Ryan Flood delivered a left-footed blast, the goal-of-the-day, to tie the match. In PKs, Corona del Sol converted its first four attempts before a Cathedral save kept the match going.

"We like to put the ball on the ground, but it wasn't working," Corona del Sol coach Dan Salas said. "[Cathedral] defended better than anyone we've played, and we couldn't unlock it. … At halftime, we told the guys, 'I know you don't like it, but we have to go direct."

The move paid off as Corona del Sol controlled much of the second half, and Cathedral’s chances were limited.

Auburndale (Fla.) 1, San Clemente (Calif.) 0: Freshman standout Ducarmel Jennestin scored late in the second half to carry Auburndale to a win over the host team.

GK Kevin Barrera, Servite (Calif.), Sr.: Barrera made two first-half saves to keep the game scoreless before Servite took control with a pair of goals. He showed the ability to get off his line and close down attackers.

F Carter Clemmensen, Brophy Prep (Ariz.), Jr.: Tall, strong attacking player who has committed to UC Santa Barbara, Clemmensen is simply a handful for most high school defenders. Although Clemmensen did not factor in the goals, he was a whistle away from several breakaways.

D Aidan Cuevas, Loyola (Calif.), Jr.: A forward converted to defender, Cuevas was the key in Loyola’s defense, then came forward to score the team’s only goal.

F Ryan Flood, Corona del Sol (Ariz.), Sr.: Coaches said Flood did not have an overly impressive outing, but when the team needed it most he showed the quality that has made him an all-state performer. He settled a pass, created space then ripped a left-footed, far-post shot that pretty much no keeper could stop.

MF Manual Garcia, Cathedral (Calif.), Sr.: Incredible work rate on both the offensive and defensive sides of the ball. Garcia was all over the field, creating chances and pressuring opponents.

D Derrick Hall, Brophy Prep (Ariz.), Soph.: One of several highly talented underclassmen in Brophy’s lineup, Hall had a standout performance. He is a ball-winner and step up as an organizer in the back.

F Ducarmel Jennestin, Auburndale (Fla.), Fr.: The days of this player being an unknown are about to come to an end. The Haitian already is built like an upperclassmen and he has blazing speed. He still needs to work on finishing, but he finished the one that mattered most Thursday night -- the lone goal in the team's win over San Clemente.

D Nick Mootz, Hamilton (Ariz.), Sr.: The defender kept Hamilton organized and did not allow Servite to get behind him. Both of Servite’s goals came from set pieces.

MF Jose Sosa, Servite (Calif.), Jr.: Proved to be dangerous on set pieces – scoring on a direct kick from 19 yards out and serving up a corner that led to the team’s second goal. The first goal was touched into play by Marc Trejo before Sosa struck it.

D Connor Thorne, Corona del Sol (Ariz.), Sr.: Consistent and tough pretty well defines Thorne. He made a hard, yet clean tackle in the second half that sparked a four-pass series for his team.

F Fernando Vasquez, San Clemente (Calif.), Sr.: Vasquez was responsible for a lot of the pressure the Tritons' put on goal.

All 12 matches at this year's Lotto Sport Western Showcase will be live-streamed, and will be available on this link.