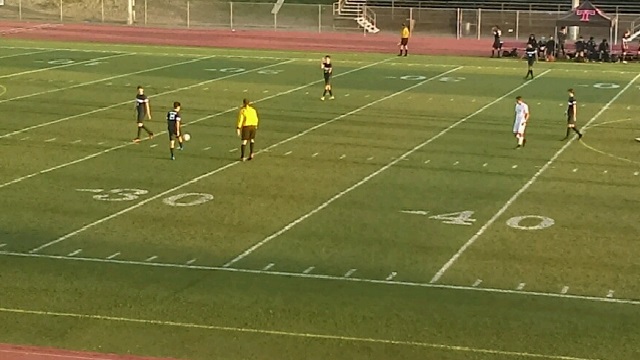 A nifty header by Emilio Echeviral and smashing back door finish by Ryan Flood – both in the second half -- carried SIMA FAB 50 No. 10 Corona del Sol to a 2-0 victory between these Arizona powers Friday night, capping the second night of play at Thalassa Stadium.

"That was two great teams and a great outcome for us," said Flood, who has scored in both of Corona del Sol's wins in the eight-team tournament. "Being two of the top teams in the state, we realize where we sit in Arizona, but to come here and show [out-of-state] teams we can compete with the best feels really good."

Corona del Sol created several first-half chances, but came up empty in a scoreless first half. Then, Echeviral flicked a ball over the keeper for the first goal that put the Aztecs well on its way to victory.

"It's really early in the season," Brophy coach Paul Allen said. "Sometimes the ball doesn't bounce your way. We're going to win some, lose some. The goals we gave up, we can fix that. … We're not done."

Servite (Calif.) 3, Auburndale (Fla.) 0: Asa Fuller scored twice and Servite (3-0) neutralized Auburndale’s (8-2) speed with quickness of its own in the victory.

Alejandro Pinon gave Servite an early lead before Fuller muscled his way through a defender for 2-0 halftime margin. The Friars were not threatened the rest of the way, and Fuller capped the scoring with a second-half goal.

Hamilton (Ariz.) 2, San Clemente (Calif.) 0: Joshua Drack scored the first goal, assisted on the second to send Hamilton (3-2) into a fifth-place contest with Cathedral on Saturday. Channing Chasten scored the other goal.

F Channing Chasten, Hamilton (Ariz.), Soph.: Chasten made a nice move to create space and score in Hamilton’s 2-0 win over San Clemente. He is skillful on the ball and tripped up defenders more than once while running right at them.

MF/F Joshua Drack, Hamilton (Ariz.), Sr.: Grand Canyon commit was the best player on the field during the Hamilton-San Clemente match. He scored a goal and assisted on the other.

MF Emilio Echeviral, Corona del Sol (Ariz.), Soph.: Just when it appeared Echeviral was going to play the ball back toward the 6-yard box, he instead flicked it over the keeper for what proved to be the game-winner.

F Ryan Flood, Corona del Sol (Ariz.), Sr.: Flood again was an impact player, using his size and speed to create several chances. He is the only player to score goals both nights.

F Asa Fuller, Servite (Calif.), Sr.: The day’s lone multi-goal scorer, Fuller isn’t fast, and he was often caught offsides, but he simply has a knack for scoring.

F Manuel Garcia, Cathedral (Calif.), Sr.: His effort is nonstop, and it propelled Cathedral into an early lead. Cathedral’s first goal was a follow-up of a Garcia shot, and he assisted the second goal. He applies a lot of pressure and is able to hold the ball, as well.

F/MF Luciano Gazcon, Loyola (Calif.), Sr.: Gazcon was a hard worker and created several of Loyola’s chances in the loss to Cathedral.

D Deric Hall, Brophy Prep (Ariz.), Soph.: Hall had another solid performance in the back for Brophy.

D Lucas Holopainen, Cathedral (Calif.), Sr.: A tall center back, Holopainen is comfortable playing on the right side, as well. He adds an extra layer to the team’s attack, able to overlap into the midfield and pushing up even higher on dangerous set pieces.

F Ducarmel Jennestin, Auburndale (Fla.), Fr.: Jennestin was less of a threat Friday night, but his speed and skill on the ball had the Division I coaches who were present impressed with the 14-year-old from Haiti.

D Corbin Mercado, Servite (Calif.) Jr.: Mercado appeared to score a goal in the first half, which was waved off as play continued. A tall defender, he won everything in the air and on the ground. Like many athletic, tall defenders, he moves up on restarts and twice nearly scored. He is being courted by several NCAA Division I programs.

MF Alejandro Pinon-Maldanado, Servite (Calif.), Sr.: Pinon scored the first goal, but his defensive play in the midfield heped set him apart. He closed down space and made it difficult for Auburndale to move forward.

MF Chase Steeves, Hamilton (Ariz.), Sr.: Steeves is working his way back into the starting lineup and made quite a case Friday afternoon. He assisted the first goal and used his skill on the left wing to create several chances throughout the match.

All 12 matches at this year's Lotto Sport Western Showcase will be live-streamed, and will be available on this link.